VR is here and growing in popularity. ‘Virtual Reality’ was fantasised about in 80’s movies and pop culture. But now we use it not just as a tool but as a form of entertainment. It’s the use of visuals and audio to create a simulated environment. The idea is to put the user inside of the experience. Rather than being an external observer, they would sit at the centre and interact with a 3d environment. The end goal might be to stimulate as many senses as possible. But for now VR is primarily concerned with recreating visual and audio through headsets, that users wear. 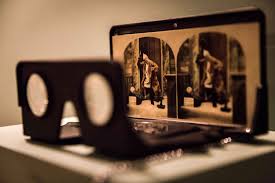 So where did all this simulated environment stuff begin? Certainly not a long time ago since there was not computers till recent decades? Actually the idea of creating a simulated environment has been around a long time. As early as the 1800’s people were interested in how immersive sensoral stimulation, can lead to the experience of a simulated environment. Charles Wheatstone’s ‘sterescopes’, utilised the brains nature of creating 3d imagery from the signals from each eye. By placing a 2d image in front of each eye that portray the same scene at slightly separate angles, the viewer sees 3 dimensional depth in 1 image.

EC Brighton is off to its own VR adventure. We’ll be heading to one of the most accessible VR experiences, to try out fun games and experiences. We’re really excited to lose ourselves in a virtual environment and enjoy the experience of playing together in this new and exciting technology.