One of our students at EC Bristol English School, Erika Squadrone, wrote a story as a follow up to a fairytale analysis lesson. Please read below Erika's fairytale. 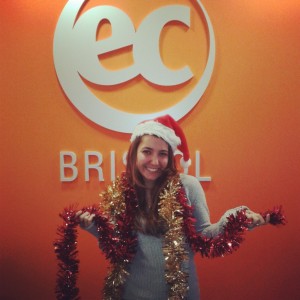 Once upon a time there was a big Kingdom and a handsome prince who was organizing a ball to find his lover for the rest of his life.

In this land there was a Old Wizard called “Cringer” who was craving a way to became a prince of that Kingdom. So having heard about the ball, he thought to sneak inside the Castle and try to reach alone the prince and to replace him in someway.

Before the ball took place, he had penetrate silently inside we went to the real prince transforming him into a ugly frog. Thus he decided to take his appearance, so no one would suspect that he was someone else.

The poor Prince was shocked,  hopping  out the Castle , going to the ditch trying to find a refuge.

The unlucky could only change back to himself during the Plain moon, but the spell made him dumb, that only the kiss of  the true love could broke it.

During the ball, the fake prince had found a kind, innocent princess and he desired her to become his wife. Unfortunately for him, the young lady discovered his secret following him and saw him transforming himself into a Eagle and flying out from the window searching for the “frog prince”.

At the moment he came back, the princess threatened him to tell the truth to the entire population.

After she had finished to say those word, the Old man decided to lock her in the highest floor of the Castle's tower. The unfortunate girl was crying night and day, the “ frog prince” was hearing her and promising himself to rescue her at the first plain moon.

He had to wait only two days, after which when the night had come down he started to climb the tower and when he had arrived at the top he discovered the beautiful princess in tears. When their eyes had met both of them fell in love to each other declaring their eternal love.

He was trying to explain his story with the gesture when the fancied girl, taken by a fit of tenderness,  leaded and kissing him with passion, suddenly he started to speak again, the spell was broken.

When everything seemed quite,from the window came straightly towards the girl the vicious Cringer turning himself into a dragon. Immediately, the prince found in the corner of the room a pitchfork with which he started to stick and pierce the chest of the dragon until he fell down writhing in pain  and exhausted the dragon changed back into the Old man.

At the same time he had transformed, the lady jumped on him and with a fireplace tool, she started to rip the chest of the Cringer, she opened it and pulling out his heart and starting to bit and ate it sharing this good piece of win with his prince. In the beginning he was disgusted but when the lady told him that one day she had heard the Wizard talking about the magical powers of his heart, which one of those was the immortality. Both of them started to ate it becoming immortal and ruling the kingdom forever together.