EC Bristol students were being asked to do a writing excercise inserting set phrases into a story such as 'let's go and get hammered'.

Sezgin, one of our Turkish students, did the best piece of writing and we would like to share it. 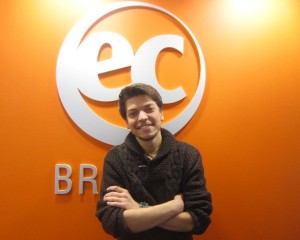 'Let's go and get hammered' said an elderly man thinking himself in his prime when he was sitting on his rusty chair and watching the empty wall in a daze.

On his last day, it was silent in the corridors which smelled of a disgusting cleaning chemical, as usual, in the mentally diseased person's unit in the hospital. Every person who met him thought that he was living in cloud cuckoo land. In fact he was born there because his insanity was the only inheritance to him from his mother who died while giving birth. A woman fancied him when he was working as a mechanic in the village. Then he was sentenced for killing her by using a screw driver, after his favourite football team lost the match eight-nine. His father didn't reckon he'd be able to carry on after that and he commited suicide.