When is St George’s Day?

St. George’s Day is on 23 April. It is England’s national day. 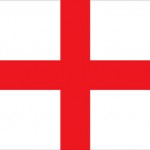 Who was St George?

St. George is the patron saint of England. His emblem, a red cross on a white background, is the flag of England, and part of the British flag. St George’s emblem was adopted by Richard The Lion Heart and brought to England in the 12th century. The king’s soldiers wore it on their tunics to avoid confusion in battle.

Who was the real St George and what did he do to become England’s patron saint?

St George was a brave Roman soldier who protested against the Romans’ torture of Christians and died for his beliefs. The popularity of St George in England stems from the time of the early Crusades when it is said that the Normans saw him in a vision and were victorious. 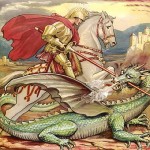 St George is always depicted as a knight carrying a shield with a red cross, generally sitting upon a horse and always killing a dragon.

By tradition, 23 April is the day for a red rose in the button hole, the national flower.

So enjoy the day and have a great weekend!