The Christmas lights are on, it’s almost December and the days are getting shorter and shorter. Soon Santa Claus will be here. But who was Santa Claus and where did he come from? 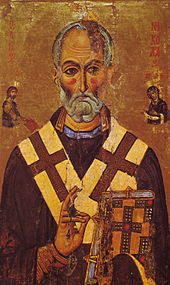 Santa Claus, also known as Saint Nicholas, Sinterklaas, Father Christmas and simply “Santa“, is the primary inspiration for the Christian figure of Sinterklaas. He was a 4th century Greek Christian bishop of Myra which is now known as Anatolia in Turkey. Saint Nicholas was famous for his generous gifts to the poor.

In modern day depictions, his clothes were originally green, but this changed to red. It is widely believed that Coca-Cola changed the colour of his clothes, yet there is no proof that this is true.