Comic Relief is an operating British charity, founded in 1985 in response to the famine in Ethiopia. The highlight of Comic Relief’s appeal is Red Nose Day, but why a red nose? It is believed that the idea of a red nose could symbolise comedy because they are commonly used by clowns.

The USA and Australia also have a Red Nose Day. In Britain it’s March the 15th, where people all over the country do stupid and amazing things to help raise money for charity, for example:

But then, some celebrities do really amazing things for Comic Relief, or its sister company Sport Relief. Some people run the length of the country to raise money, or swim the English Channel from Dover to Calais. Of course, EC does not expect you to ski to school or talk with consonants all day just to save time. But if you’d like to donate anything to help those who are less fortunate than us, it would be a big help! Here’s a photo from our last charity day, Children In Need where we raised over £200! Lets try and get £300 this time! 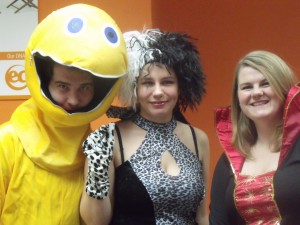