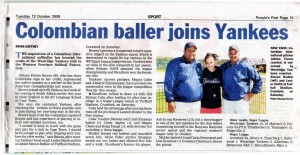 When Colombian softballer, Juliana Forero Becera, came to EC Cape Town for one year to learn English, she contacted local team Westridge Yankees searching for a club to play with during her time at EC.  Julliana, who represents Colombia at international level, has been signed by the Yankees and will now combine her English language course with being a welcome member of one of the top clubs in the Western Province Softball Federation. This is how the story was covered in the local newspaper ‘People’s Post’:

THE acquisition of a Colombian international softballer has boosted the ranks of the Westridge Yankees club in the Western Province Softball Federation.
Juliana Forero Becera (20), who has three Colombian caps to her credit, represented her native country as a pitcher in the South American championships last season, Becera joined up with Yankees last week after coming to South Africa earlier this year to study English at the EC Language School in Cape Town.
She says she contacted Yankees after checking the website to find a possible club to join during her yearlong stay in the city. Becera hails from the Colombian capital of Bogota and has experience of playing infield and outfield positions, too.
“I needed to keep in touch with the game and play for a club in Cape Town. I should be fit enough to play after training with Yankees for a few weeks,” said Becera, after meeting Yankees’ head coach Lester Smith and his assistant Steven Rodkin at Turthall Stadium, Crawford on Saturday.
Becera’s presence is expected to have a positive impact on the Yankees squad, which is determined to regain its top ranking in the WP Super League competitions. Yankees won no titles in the elite competition last season, when Falcons SAPS annexed the league championship and Glenthorn won the knock-out title.
Yankees’ current pitchers, Megan Cable and Almarie Kannemeyer, have pivoted two consecutive wins in the league competition thus far this season.