After Nicoletta’s lecture on Thursday on the ‘History of Chocolate’ students were asked to write an essay about the talk. Below is an essay written by Hadi Ghodsinezhad:

“Over the past afew years, more and more people have been eating chocolate. Eating chocolate not only gives us energy but also makes us feel happy due to a special ingredient which helps endorphines and also the most important reason of eating chocolate is its marvellous taste. The objective of this essay is following path of chocolate so far.

Chocolate was originally used in Mexico thousands of years ago. Mexican Indian people were the first to drink chocolate. It was a luxurious brown bitter drink that rich people could afford to drink. That and it also had been given to human sacrifice victims before they were offered to God to make him happy. Chocolate is produced from cocoa seeds which came from the cocoa tree fruits.

Hernan Corts, who was a Spanish explorer, brought cocoa seeds from Mexico to Spain in 1517. Chocolate drink was still too expensive; only noble or rich people could afford to buy and drink the beverage. The taaste of this fashionable drink was changed by adding some straneg things, such as, potato flavour, bean flavour and sometimes dangerous things to change its taste were added for instance brick powder and marble dust which resulted i nthe death of those who drank too much chocolate.

Eventually in 1847 an English company (Fry & Son) mixed some sugar, .ittle bit cocoa butter & cocoa powder. They tried to make the first sweet chocolate similar to that which is produced these days. then in 1875 the first milk chocolate was made by Peter Daniel and Henri Nestle. After that, competitions between different companies were started. Ultimately in 1879 the Conching machine helped companies make smoother and better chocolate was invented. Nowadays people have been producing chocolate with various tastes such as different fruits, cheese, vegetables and so on. Not only are people used to eating chocolate, but also it is gotten used in art, fashion and beauty e.g. making chocolate musk in order to solve skin problems” 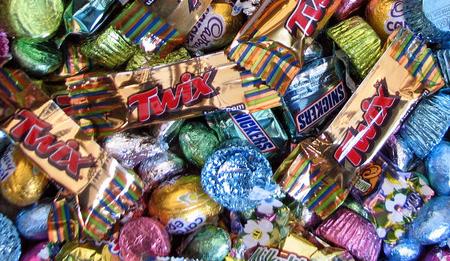