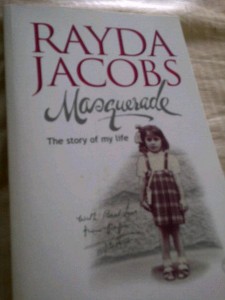 Masquerade: The story of my life, follows the life of Cape Town-born, Rayda Jacobs. From her childhood in Diep River to her family’s forced removal to Athlone, Jacobs takes up a job as working as a (white) legal secretary in the Cape Town CBD. After authorities are alerted to this, she leaves her position, packs up and moves to Canada with her younger sister.

27 years later, following two marriagess and two children, Jacobs returns to South Africa in the early nineties. She begins writing full-time and making documentary films. This new career path ultimately lands her the lead role in Confessions of a Gambler, a film based on a book authored by Jacobs herself.

I’ve enjoyed going back in time with the author and experiencing life during the apartheid era through her eyes.