Last week the Intermediate 1 class had to create a story about a criminal named Finch. They invented their own details to a famous burglary that took place in Brazil. It was spoken by Mohammed, written by Cibele and corrected by Murat.  This is the story of how Finch got away: 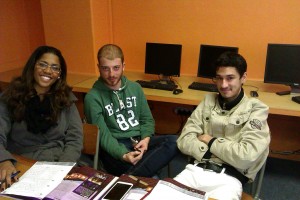 He was very smart and he had technology, so he put a toy car in the garden with a camera and he moved it until he stole a USB. After he got a car, somebody of security saw him and switched on the alarm. He heard an alarm and started running away.

After that, in airport, he was nervous, but he was very smart and he put the USB into a toy car. However, he left UK safely, but when he went back to Brazil, the customs officers stopped him, because the UK airport called to Brazil and told them that they think that he was a thief. They stopped him to look for a USB, but they were a little bit stupid because they did not think that the USB into the toy car.

They left him because they were not sure that he was the thief, and they didn’t follow him. He was very happy and he sold that information in the black market for U$ 1 million.