Last week, my High Intermediate class had a listening lesson – with a twist!

Since the theme for the week was “Sport”, we invited two guest speakers to the class. The first was a fellow classmate, Ziya from our class who has been boxing since he was young. The other guest was our very own Abdul who is a rugby player! 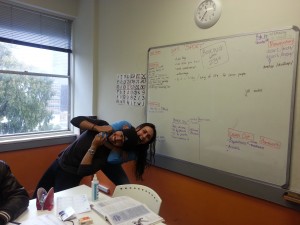 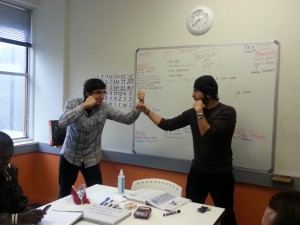 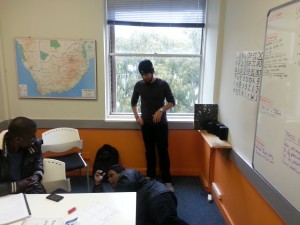 Ziya has been boxing for over 10 years and practices daily. He initially got into it to avoid being bullied at school, but it soon turned into a full time hobby. When asked if he’s gotten into a few fights, he responded that he is not hot-headed and knows his limits.

Abdul gave some demonstrations. While it is a fun sport, it is also competitive. Not only does it build up strength, Abdul claims it keeps the youth away from getting into trouble, as their time is rather spent practising the sport.

The class took a typical “listening class” and used the information presented by the two speakers to take notes and eventually write a report based on what was said. Students were also encouraged to take note of the usage of Prepositions, Articles and various Pronunciation. It proved to be an engaging and worthwhile activity and was enjoyed by all. Thank you to Abdul and Ziya for sharing their sporting experiences with us.