Students in Chimonay’s Pre- Intermediate visited the Slave Lodge, which was built in 1679 by the Dutch East India Company, and housed thousands of slaves between 1679 and 1811. Students learned about the long history of slavery in South Africa as well as viewing fascinating historical displays on the Cape on exhibition

This is what some students had to say about the excursion:

1) This museum was beautiful place because It talks about history of slavery in South Africa.
2) This bulding was renamed to “slave lodge” in 1998
– Abdalrauf

“Actually, I don’t know what can I say, but I’ll tell you I enjoyed yesterday. At first time I was affected by dizziness espicially when I entered the small part (area) that had 5000 slaves. It was difficult for me” – Entesar

“Yesterday we went to slave lodge museum to learn about history of S.A and effect of slavery in society. On the other hand it was a learning trip. One of the main advantages of this kind of trip is that we can study better than in the class. I’ve studied before about slavery but this museum helped me to learn more.” – Neda

“It was so nice! I think that is a good idea to learn the language and learn the story of South Africa! Thank you for the experience!” – Fawzi 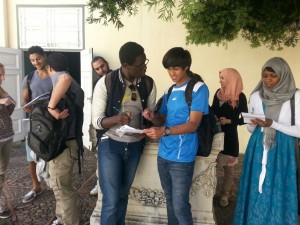