On Wednesday 23 October students went to a soccer match, Ajax Cape Town against Free State Stars in the Cape Town stadium. Ajax Cape Town is a South African football club based in the Parow suburb of the city of Cape Town that plays in the Premier Soccer League. Dutch Eredivisie club AFC Ajax is the parent club and acts as the majority shareholder which is why a lot of supporters were wearing beanies/caps and shirts of Amsterdam.

We met with the students at 6 o’clock in front of the school since the game would start at 19:30. From the school we walked to the stadium – which is only 15 minutes from the school – on the ‘Fan Walk’ . When we arrived at the stadium it wasn’t that busy and so didn’t have to wait in a queue. Before we went to our seats we first bought some vuvuzela’s, beer, donuts and hotdogs aka the complete package for a soccer match! 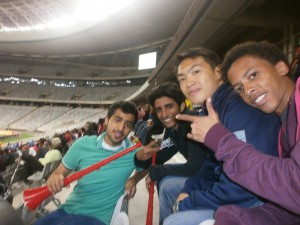 Luckily the school booked us some tickets nicely in the middle of the stadium so we had a nice view of the match. On our right were the real die-hard fans of the Urban Warriors (Ajax Cape Town). They were all in Ajax shirts and one guy was even dressed up as Ajax. The whole stadium was filled with sounds of the vuvuzela’s, which gave a nice touch to the atmosphere. Then it was 19:30, time for the game to start. It started with a lot of action, the first attack of Ajax almost ended in a goal already. But we didn’t have to wait long before the first goal was made. A defensive slip allowed Telinho to profit after just 14 minutes as Ajax ended a streak of five league matches and a cup game without a win. The victory lifted them from the bottom of the Absa Premiership table. Before this matche, Ajax was the only club in the elite league yet to win a game.
So it was a good day for Ajax and a good day for us!