When EC Cape Town moved into the new building, we needed to create a look and feel for the school which would reflect South Africa in general; and Cape Town in particular. That’s when I first heard of “Humans of New York”. In this project, which started in 2010 in New York city, the photographer, Brandon, decided to take photographs of about 10 000 New Yorkers. Along the way, he also started interviewing his subjects and collecting short stories or quotes. This eventually led to a vibrant blog, facebook page and, ultimately a #1 bestselling book. We decided to do something similar, so if you’ve ever wondered about the portraits on our walls, let me introduce you to some of the humans of Cape Town that we met that day. This is Goodman Nono. 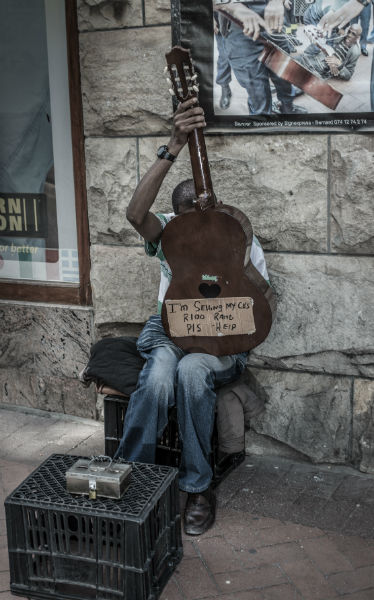 Goodman Nono is a familiar face and sound in Cape Town’s famous Greenmarket Square. For many years, this blind musician has been busking (playing publicly in the streets) at Greenmarket Square. In 2013, he became even more famous when police forcibly arrested him for ‘loud noise in a public space’, subsequently breaking his guitar. What made this even more crazy is that there were 6 policemen and Goodman was alone. They fined the street performer R1500, even though he only makes about R300 a day with his music. Witnesses who saw the attack were outraged and protested against this police brutality. They called the newspapers and radio stations to express their outrage and the video clip of the arrest went viral immediately. Today, Goodman Nono is free to sit and play his guitar at Greenmarket Square as he always has. so, the next time you walk past this man again, remember this story and please support his music! 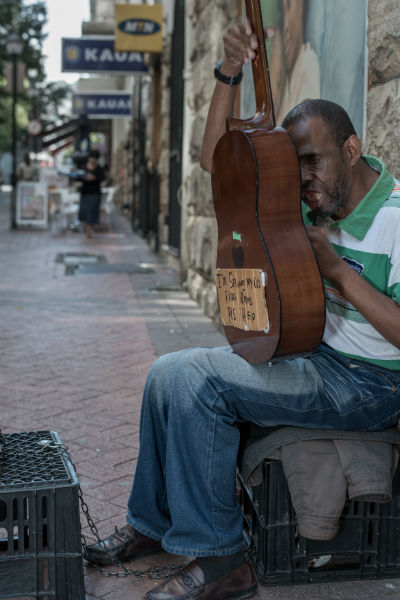 Goodman is one of the subjects of the art project which is series of photographs hanging on our walls at EC language school Cape Town.  Tell us what you think of the collection or which one is your favourite.