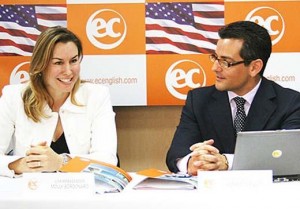 A press conference was held today to announce to the assembled television and print media that EC has acquired a new school in San Diego. The press conference held in EC Malta was well attended by the Maltese media and also Maltese dignitaries including the US Ambassador, Molly Bordonaro. EC Chief Executive, Andrew Mangion, announced that EC is looking to strengthen its presence in America by opening more schools in the near future.

See how the news was covered by ‘The Times of Malta newspaper.