You might think you have never seen much of the city of Vancouver, but you might be familiar with more of this stunning city than you thought. Vancouver is the third most popular city in the world for film locations, just after Hollywood and New York City. Here are some of the most famous movies and TV shows shot at iconic around this beautiful metropolis. If you like what you see, remember to check out our English courses in Vancouver to experience all that this incredible city has to offer.

Love it or hate it, everyone knows about the famous Twilight Saga! The films are set in Washington State in the USA, but, many scenes were filmed in Vancouver and the surrounding areas. Bella’s trip to downtown Seattle was actually shot in downtown Vancouver – her drive there and back is set against the beautiful coastal road from Whistler to the city centre. Flashbacks to both Rosalie’s and Edward’s pasts also show iconic Vancouver landmarks including the Orpheum Theatre and the Vancouver Art Gallery.

This iconic series, and its 2016 revival, was almost entirely filmed in Vancouver and the areas around it. One important scene in particular was shot at Grouse Mountain, famous for its challenging hikes and beautiful views. In the episode “Ascension”, Fox Mulder attempts to rescue Dana Scully from being abducted by aliens on the top of Skyland Mountain. He nearly falls off of the aerial tram in the process, but manages to get to the top. Skyland Mountain is actually Grouse Mountain, and the tramway Mulder rides is called the Skyride, which offers beautiful views of Vancouver 365 days a year.

This series is almost exclusively filmed in Vancouver, often re-using recognisable Vancouver monuments in their TV show. One area that is often used as a backdrop is Coal Harbour, a stunning location near Stanley Park and boasting beautiful views across the bay to North Vancouver. In the episode “Red Sky at Morning”, Sam and Dean are shown walking along a harbour road, where many yachts and sailboats can be seen in the background. The mountains of North Vancouver located across the bay mark the location as the glamourous Coal Harbour.

The iconic BC Place has appeared multiple times in this series, usually as S.T.A.R. Labs, but has also been used as the stadium where Barry chases the Reverse-Flash in the episode “The Man in the Yellow Suit”. The unique roof cables give this location away throughout the series. 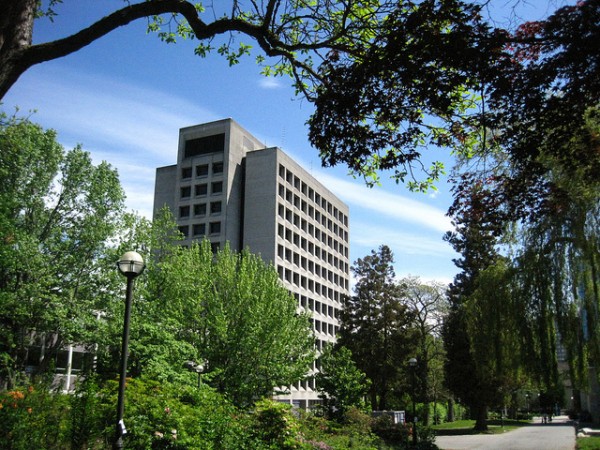 After James (Wolverine) and Victor (Sabretooth) join Team X, one of their missions is to take down a diamond trafficking ring in Lagos, Nigeria, and retrieve a meteorite. This scene was shot at the University of British Columbia’s Buchanan Tower.