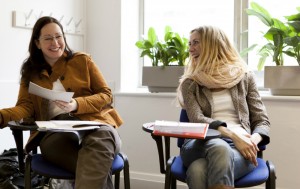 So, yesterday was April Fools’ Day in the UK, the only day of the year when you are allowed to play a trick on someone! Did you play a trick on anyone or were you the Fool?! Some of our classes at our 30+ language school yesterday learned about this special day.

What is April Fools’ Day?

On the 1st April we have April Fools’ Day, sometimes called All Fools’ Day and has been popular since medieval times. Every year we play practical jokes or hoaxes on one another, and children are especially excited by this day. Here in the UK an April fool joke is revealed by shouting “April fool!” at the recipient, who then becomes the “fool”.  In Scotland, April Fools’ Day is traditionally called Hunt-the-Gowk Day (“gowk” is Scottish for a cuckoo or a foolish person). In France or Belgium and French speaking countries, in general it is a kind of a tradition to stick a paper cut-out of a fish on a person’s back without being noticed. In these countries they call it a “poisson d’avril”, literally meaning: “April Fish”.

On the 1st April 1572, Dutch rebels captured the town of Den Briel from Spanish troops led by Lord Alva. This military success eventually led to the independence of the Netherlands from Spain. A Dutch rhyme saying goes: “On the 1st April – Verloor Alva zijn Bril.” This translates to: “On the 1st April – Alva lost his glasses”. “Bril” means glasses in Dutch, but is also a pun on the name of the town, Den Briel. According to Dutch legend, the tradition of playing pranks on the 1st April arose to commemorate the victory in Den Briel and humiliation of the Spanish commander.

Here are some of our favourite pranks…

1980: The BBC reported that Big Ben, in order to keep up with the times, was going to be given a digital readout. The announcement received a huge response from listeners shocked and outraged by the proposed change. The BBC Japanese service also announced that the clock hands would be sold to the first four listeners to contact them. One Japanese seaman in the mid-Atlantic immediately radioed in a bid…

One of our personal favourites is the ‘Flying Penguins’…have a look at this video.