My mouth was dry and I was panting. We got nearer and I asked Matt, “Is this it?” He nodded, apparently too knackered to reply verbally. We’d finally managed to get up the two flights of stairs to our hotel room. One final night’s sleep in the Cruachan Hotel and then Charlie, Chris, Dan, Joelle, Kat, Matt, Rich, Sarah and I would begin our challenge to climb Ben Nevis, Scafell Pike and Snowdon in under twenty-four hours.

“Be bold, start cold” was the advice we got from Rusty, our guide. The idea was to not wear too much clothing at the bottom of the mountain, so that you don’t get too hot later on and end up having to take off more clothing further up. Having grown up in Nicosia, my tolerance for low temperatures isn’t great. So, of course, I didn’t listen. And, of course, after about half an hour of trekking I was frantically trying to remove clothing during our two-minute water break. 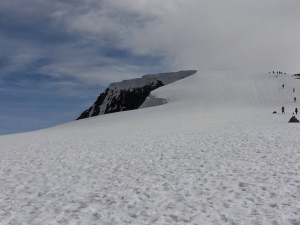 We got lucky with Ben Nevis. It was a lovely day, a little cloudy but clear enough and not too cold. Most importantly, it was dry and bright. After about four or five hours of uphill trekking, we finally made it to the top. Once there, we couldn’t help but take our time to appreciate the views. 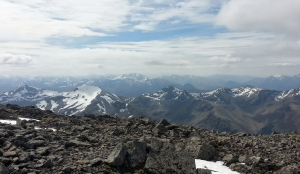 Before long however, we had to make our way back down and on to the next peak: Scafell Pike.

I’d visited Scafell Pike on family holidays before but had never climbed it. My childhood memories of the mountain are much fonder than those I have of this climb. We arrived at around 22:30 and started our ascent at 23:00. It wasn’t dry or bright. We were well equipped with head torches and waterproof suits, but my walking boots weren’t waterproof. Every step I took felt like stepping into a puddle barefoot. Besides this, as we got closer to the top the path became more and more difficult to follow. We tried hard to stay close together, but it wasn’t always possible and at times we became disorientated.

Indeed, the path became so difficult to follow that even Rusty, with his vast mountaineering experience and brilliantly rustic name, got us slightly lost on the way down. If memory serves, I was following Sarah and Matt. As we were climbing down, the terrain got rougher and rougher. Soon it became clear that this was not the path that we’d climbed up. It also soon became clear that it was going to require great effort to get back on track. We continued to carefully follow Rusty by trying to find the least dangerous rocks to step on. At one point, Matt slipped on one of them and fell. I immediately feared he’d injured himself, but luckily he came away with just a bruise on his thigh (and a strong aversion towards the words “Scafell Pike”). After about half an hour, the terrain got more and more gentle and we were back on the path. Our spirits by this point were as damp as my feet, but we kept going and got back to our van where a delicious spaghetti meal was waiting for us. 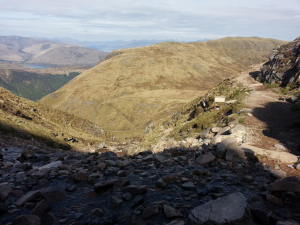 By the time we reached Snowdon, our energy levels had risen back up. We were well up for completing the challenge and trekking in daylight and relative dryness. The main hurdle climbing the last mountain was body ache and fatigue. My knees were sore, my back was tender and I longed for a hot bath. When we finally got to the top, there were high fives and cheers all round, but for me at least, the achievement didn’t sink in until I was back home wearing clean clothes and not smelling of sweat and mountains.

When I did get home at 23:00 on Sunday, I realised that we’d done something unforgettable. A great experience, topped off by the fact that we’d managed to raise over £8000 for our chosen charities. I’m already looking forward to doing something similar next year! 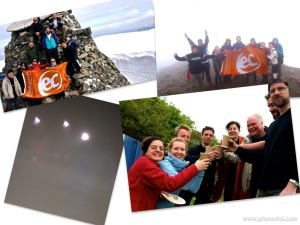