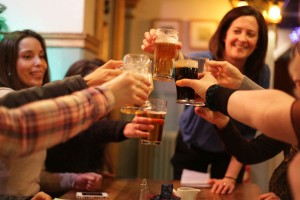 I’m not sure if anyone eats more pies per person than the British – or the Scottish, but we here in the UK certainly love a bit of meat in pastry or potato.

But now autumn is arriving and the mornings are getting cold, where are best places near EC London 30+ to get your hands on a hot, crusty, flaky, pastry-covered mouthful of meat?
My favourite pie shop (near to EC London 30+) is the Newman Arms, just north of Oxford Street  – and it seems Time Out agrees in its TOP FIVE PIE RESTAURANTS IN LONDON!
But what is a pasty? What is the difference between a ‘Shepherd’s pie’ and a ‘Cottage pie’? – here are a couple of examples to whet your appetite…

The Daily Mail did a survey a couple of years ago to find that Shepherd’s pie is the most popular winter dish in the UK. It is made with lamb (‘shepherd’s’) or beef (‘cottage’) with sauce covered with mashed potato. Mmmmm.

HISTORY: Potatoes became popular as a food of the poor in the 1700s in the UK – the word ‘cottage’ (a small house for a rural worker) became associated with the dish. Originally, cottage pie used leftover roasted meat of any kind, inside a mashed potato ‘envelope’

INTERESTING LANGUAGE FACT: It was only in 1877 that the term ‘shepherd’s pie’ was first used for a lamb pie, separately from the beef based ‘cottage’ pie.

AROUND THE WORLD : In Argentina and Chile a similar dish is called “pastel de papa” or “pastel de carne”. The Chilean version includes minced meat, minced and fried onions, black olives, raisins and hard-boiled eggs. In France, “hachis Parmentier”. In Russia, “Картофельная запеканка”. In Portugal, “Empanada”, with two layers of mashed potatoes and a layer of minced beef in between.

Travel from any large railway station in the UK, and you will find stalls selling Cornish pasties…

HISTORY: The Cornish pasty’s best known history comes from miners in Cornwall in the south west of England . The pasty was, and still is, a complete, hand-held hot meal, usually consisting of meat, potato, onion and swede in a pastry casing.

The tin miners obviously had dirty hands – often with poisonous arsenic on their fingers, so nobody ate the ‘crimped’ edges . This crimping was then left in the mines for the mischievous ‘Knockers’ (ghosts) which were said to haunt the depths…

– The pasty was sometimes divided inside into two sections so as to provide both a main course and dessert
– A good pasty was thought to be strong enough to drop unharmed down a mine shaft
– Fishermen never took a pasty aboard ship for fear of bad luck
Variations of the pasty can also be found throughout the UK and the world. It is particularly popular in parts of the United States, Mexico, Argentina and Australia.

INTERESTING LANGUAGE FACT: Early references to pasties include a letter in the 1500s from a baker to King Henry’s VIII’s third wife, Jane Seymour, that states “hope this pasty reaches in better condition than the last one…”, as well as quotes in some of Shakespeare’s plays (around 1600), including All’s Well That Ends Well: Act IV Scene III – PAROLLES: “I will confess to what I know without constraint: if ye pinch me like a pasty, I can say no more”.