Do you believe everything you’re told?

Past simple versus past continuous

Recently, I did a road trip in Australia. While I was there, I heard many a story this is one that my friend told me late one evening on Byron Beach. Although it’s not easy to swallow, it’s funny to imagine.

These two guys my friend knows work for Chase Bank. Every year they go to Australia for a big bank-sponsored surfing competition. This past year, these guys and their team won. They went out afterwards to celebrate and went on to drink lots of beers.

After drinking up a storm, they stumbled into their rented car and began their reckless drive. They were driving on a bush road when they accidentally hit a kangaroo. On getting out of the car they realised that the kangaroo had died in the accident.

Being so drunk they propped up the kangaroo against the car. They dressed it in one of their jackets and took pictures of themselves with their arms around it.

To their shock and horror, while they were taking pictures, the kangaroo came back to life! The kangaroo wasn’t dead. It had passed out! When the kangaroo came to, it started to box the drunken guys and actually broke one guy’s jaw! It then hopped away into the bush.

They called a taxi and as they were returning to town they saw a pack of kangaroos and one was still wearing the guy’s jacket. The taxi man couldn’t stop laughing!

“Unbelievable!” I hear you say. Maybe. But let’s look at how this story was told…

“They were driving on a bush road…”

“While they were taking pictures the kangaroo…”

“They were driving on a bush road when they accidently hit a kangaroo.”

“While they were taking pictures with the kangaroo it came back to life.” 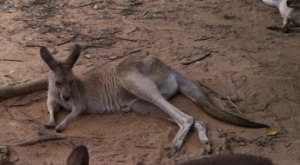