So, be/get used to, it’s one of those language points that people have a lot of problems with…but why? Let’s have a look at it in context. Check out this short paragraph about when I first came to London.

I’ve lived in London for almost 5 years now and I have to say it’s a lot easier for me than it was when I arrived. When I first arrived there were a lot of differences between London and my city that I just couldn’t get used to. For example, when I first got her, I was standing on the left side of the escalator in the tube stations, which is a big no-no in London. People got really annoyed with me. After a week, of course, I didn’t even think about it anymore and I was used to standing on the right and walking on the left. Soon I even started getting annoyed with other people who stood on the left. That was when I knew that I’d never leave London. I imagine if I went back to Dublin now, I’d find it pretty hard to get used to the slower pace of life. 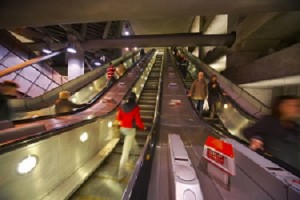 Now, let’s take be/get used to apart and see what it’s made up of.

Let’s focus on this sentence first:  “People got annoyed with me“. Let’s break it down. “Annoyed” is an adjective. We know this. “Get” is a verb, in this situation it means that the people are becoming annoyed.

Now how about this sentence: “I couldn’t get used to it“. Again, “get” means “become”, so what kind of word is “used” here? Well it’s an Adjective of course. In this situation it means comfortable with,  familiar with or accustomed to.

Check out other examples as you come across them and ask yourself what the real meaning is. Don’t get stressed out. With “be/get used to”, it’s just an adjective like countless others.

See, nothing to worry about.

If you’d like to learn more, why not think about some English lessons for adults?!

Or alternatively, check out the lessons on our Learn English website.