The future in English is a wonderful minefield of oddities and exceptions but one thing that actually makes a little bit of sense but is often avoided by students is the future in the past. The idea here is to discuss the future of a past time. It’s very useful, especially for discussing failed or changed plans. Check out the dialogue below between the two men in the picture, talking about their weekend and then we’ll have a look at the structures in more detail. Click on the links to get the meaning of the more difficult words. 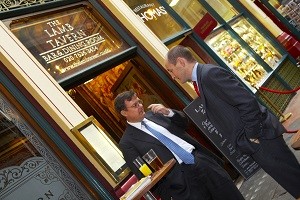 Andy: So, how was your weekend?

Joe: Well, you’ll never believe what happened to me. We went out on Friday night after work for a few drinks in the local and we were hoping to leave there about 8:00 but as usual we ended up having a few more pints than we’d planned. So we left at about 10:00 and we were going to go to a bar in Soho but on the way this fight broke out next to us on Tottenham Court Road. We weren’t involved but somebody called the police and they were going to arrest us because they thought we’d started it. Well, we explained what had happened and some passersby backed us up so the police let us go but it was quite scary.

Andy: Wow! Why didn’t you just turn around and run in the other direction when you saw the fight?

Joe: Well we were about to run away but a lady fell over next to us and hit her head on the footpath so we were trying to help her when the police arrived.

Andy: Oh OK, well maybe next Friday you should leave at 8:00. I think you’re getting a little bit old for this kind of thing.

Joe: Tell me about it! It’s a young man’s game.

Can you spot the future in the past above?

Structure: was / were going to + verb

Use: To talk about a plan that you had in the past. It’s usually used when the plan didn’t happen for some reason. It’s often followed by the word “but”.

Structure: was / were hoping to + verb

Use: Similar to the structure above but used to describe a hope / desire that you had in the past. Again, it’s often followed by the word “but”.

Structure: was / were about to + verb

Use: Used to talk about something that was going to happen within a short time but didn’t for some reason.

Check out our website if you’d like more information on English courses for adults in the UK.