If you’re anything like my students studying English in the U.K., at some point in your student life you’ll have been confused by the Present Perfect and the Present Perfect continuous. Well, rest assured, you’re not alone. But that doesn’t mean they are impossible, check out these examples below of the present perfect and present perfect continuous being used to describe change over time, and then have a look at the meaning / use underneath.

So I moved to South Korea for a year about 6 years ago, leaving all of my friends behind. My closest friend at the time was a guy named Stephen. We’d known each other for years. I’ve drawn a picture of him for you. 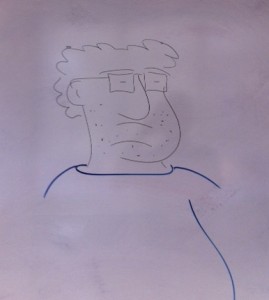 As you can see, he didn’t really look after himself very well. He was the nicest guy you’d ever meet in your life and was an amazing friend but when it came to being fashionable or doing exercise, he was a disaster. After a year in Korea, I returned home and immediately went over to Stephen’s house to say hi to him and his family. Well, you wouldn’t believe the person who opened the door. I’ve drawn another picture for you to give you an idea of what he looked like. 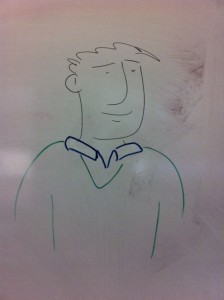 So, as you can imagine, I was extremely impressed. “What has happened to you?!” I said. Obviously, the surprise was clear on my face as he just smiled and said the following:

Well, I met a girl a few months ago and everything has changed for me. I’ve been shaving every morning now and moisturising twice a day so my skin has cleared up. I’ve also been exercising a lot more, I’ve taken up jogging and yoga and I’ve lost quite a lot of weight. I’ve been jogging twice a week for the past three months, it’s really starting to pay off. And, my girlfriend has taken me shopping a few times so I’ve started dressing a little better. It’s all thanks to her really…oh and I probably should mention that it’s your sister.

Despite being a little annoyed that my closest friend hadn’t told me he was dating my sister, I was very impressed with what she had accomplished in just a few short months. Now let’s look at one or two of the examples in a little more detail.

If you’re thinking about studying English in the future or doing adult English courses in the U.K., check out our website.