This February, a team of eight enthusiastic EC staff volunteers went to Ban Huoy, Cambodia, for a 10-day trip set up by as part of our most recent Corporate Social Responsibility initiative.

Dan, our Engagement and Sustainability Manager tells us about EC’s exciting project. 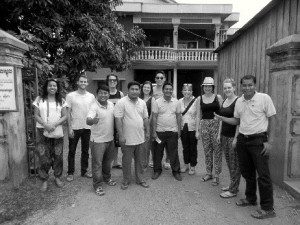 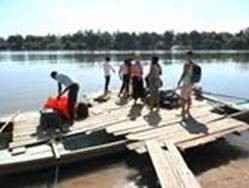 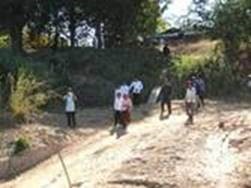 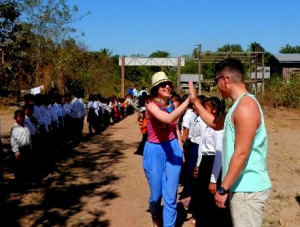 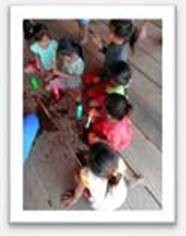 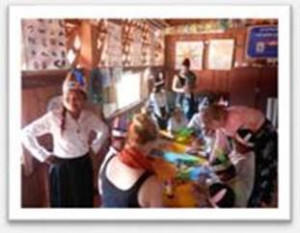 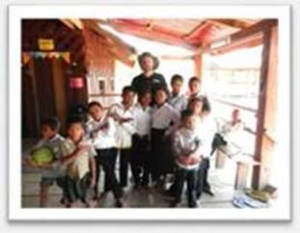 Mission success! Our eight volunteers (plus me) returned last week from our 10-day adventure in Cambodia.

Physically & mentally exhausted but deliriously happy, our team touched down in their home countries from Thursday of last week, and I’m happy to report that everyone has returned safely and without incident. Read on for an insight into our trip…

14th February – we rendezvoused at the Babbel Guesthouse in Siem Reap, with Mays arriving last (which was further delayed due to the Cambodian authorities being confused as to whether Palestine is a country!). Leanne, Agnieszka and I were minus our luggage as that had been left behind in Bangkok, but by the time bedtime rolled around all problems had been ironed out – Mays had joined us and our luggage had arrived.
15th February – up at 6am to head off to the small town of Siem Pang in the North East, an 8-hour drive from Siem Reap. Once there we met up with the UWS team, the local community leader and the Chief of Police, who just wanted to say hello…
16th February – after a couple more hours in the ‘Barang Bus’
(Barang = foreigner in Cambodian slang) and a quick trip across a river on a raft, we arrived at Ban Houy. 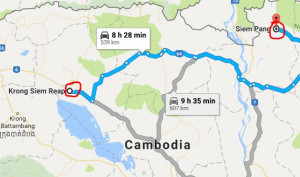 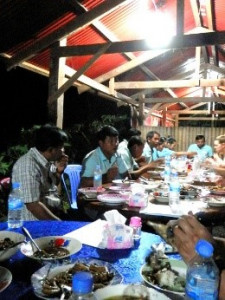 As we were halfway across we saw the
children and villagers had come to greet us, and we made our way
through the village to the school. Already emotional at the sight of the
school as it appeared between the trees, we were overwhelmed as we
were met by two lines of students who applauded our arrival. 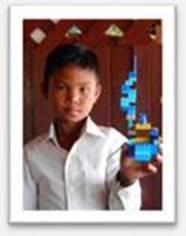 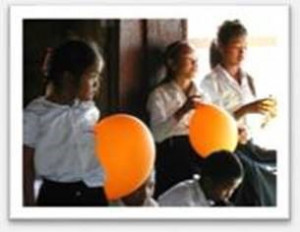 17th – 20th February – for the next 4 days we taught at the school. We’d brought with us
all sorts of toys, books and EC paraphernalia with us, and it was great seeing the kids blow
bubbles for the first time or build with LEGO. The teaching days started at around 7.30am,
and working in teams we taught group logic, individual logic, arts & crafts & music.
The kids played Jenga, made feather headdresses and paper aeroplanes, solved puzzles and sang Jingle Bells in 40 degrees. In the afternoon we put on a play (the 3 Little Pigs,
Cinderella & the Wizard of Oz) and then the children would do their version of the story.
After that it was skills (Kyu managed to get some of the kids breakdancing), then free play
(which usually involved a ball being kicked/thrown about).

On the evening of 19th February we were amazed to see the villagers pouring into the school carrying food – meals that they had cooked throughout the day so that they could sit and eat with us on our final night. The village elder told us (via our UWS translator) that the village was very happy that EC had built the school, and that they we had come to visit and teach the children. Many of the villagers had never seen Westerners before, so when we set our head torches to ‘flash’ and pumped out some Justin Timberlake via the Bluetooth speaker, they were a little bemused – but obviously pleased to see how much the kids were enjoying themselves. 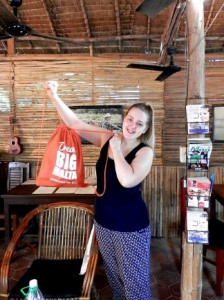 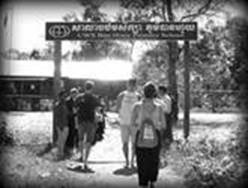 21st – 22nd February – after a tearful goodbye (us and the children!) on 20th, we returned to Siem Reap via Stung Treng. On the 22nd we had a quick tour of Angkor Wat and the temple complex before saying our goodbyes and returning to our home countries. I must say that after months of planning, I am over the moon that the trip went so well. This was in large part due to the tireless work of my UWS counterparts, but also due to the fantastic team from EC. We represented every part of the business, in terms of gender, age, location, culture and role. While each member of the team brought something different, we also brought the same thing (same same but different) – a passion for helping out, getting involved and giving something back. This I think reflects the wider EC community, and I am excited to be continuing our work with UWS, building bridges between EC and our friends in Cambodia and beyond.

This isn’t the end of an adventure, but rather the beginning of one, as we extend the EC family to the further reaches of the world and keep helping students succeed in a global community and continue spreading the message – to Dream Big!

Thanks for your support
Dan 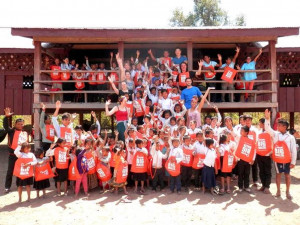