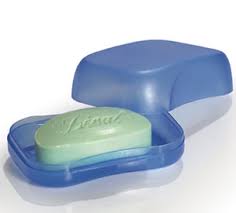 When I was a child, we used to go on holiday to Europe, usually camping, because this was in the 60s before foreign travel became really cheap. Actually, it was before Britain joined the EU; European travel will be expensive again, no doubt. My father spoke a lot of languages – he’d studied Spanish at Madrid University – and whenever we were in Spain, he would always take every opportunity to practise his Spanish with native speakers. His favourite tactic was to go into a shop and ask for a soap-dish, which was something we didn’t actually need in our tent. One day I asked him why he always asked for a soap-dish and he told me it was because it always led to an interesting conversation. This explanation satisfied me as a child, although as an adult, I think I’d find a soap-dish conversation a little limiting. My Dad always had long chats with natives, however, so I could be wrong.

What I’m saying is that we can all find opportunities to have short conversations with native speakers, particularly in public places like shops, pubs, restaurants and museums (where, of course, the staff may be non-native. But don’t forget that any time you’re having a conversation in English, it’s English. It’s not second-class if the other speaker isn’t a native. It’s English. It’s how most people in the world use the language.)

In a restaurant, be sure to ask about the food on the menu, even if it’s something you recognise and have no intention of ordering. You can practise asking questions. “How does the chef prepare this?” “Could you tell me what’s in this dish?” “How much of the food is locally-sourced? Where does it come from?” “What would you recommend on the menu?” Being a waiter is not the most interesting job on the planet and waiters are generally very happy to have a conversation with their customers.

In pubs, there are often so-called guest beers, beers which the pub is serving for a short time. You could ask the barman to tell you about them. “Is it a local ale?” “What does it taste like?” “Is there any chance I could try it? I might not want a whole pint!” Nine times out of ten if the pub isn’t busy, you’ll be asked where you’re from and – bingo! – you’ll be having a conversation in English.

Museums, and in particular small museums, are great places to strike up conversations with staff. A lot of the time their job involves standing around in a big room making sure nobody touches the exhibits. That’s so boring! Often if you start talking to them, you’ll find it difficult to escape. In my experience, museum workers can talk very fast, so don’t forget to have phrases like these ready: “Could you speak just a little bit slower, please?” “I didn’t quite catch that. Could you say it again, please?” “Sorry, I’m a little confused. Do you mean…?”

And if you ever need to ask for a soap-dish in Spanish, the word is jabonera.

Find out more about English lessons for adults in London.