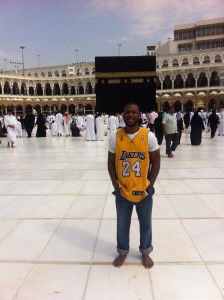 Abdurrahman Ali was born and raised in Los Angeles, California. He studied Kinesiology at Cal State LA, but always had an interest in teaching; both of his parents worked in the field of education. When he began fourth grade, the first wave of students from Saudi Arabia joined his dad’s parochial school in Los Angeles. The parents of these children came to Los Angeles to study at USC under the scholarships of their Saudi company, Aramco. he found his Arab classmates very easy going which caused me to develop close friendships with many of them. After he graduated from Cal State University LA in 2008, he decided to go and reacquaint himself with my old Saudi pals in their hometown.

His experience of living in the Arab Gulf was interesting, unique and very beneficial. He had the opportunity to develop and advance in a career which he finds to be enjoyable. He  further advanced his English teaching career by taking the CELTA course in 2011 at the British Council in Saudi Arabia.

He returned to his beautiful hometown of Southern California in July 2013 and has been working at EC Los Angeles since August. he has worked at plenty of universities and language institutes over the years, but he could honestly say that EC Los Angeles is the place to be (this goes for teachers and students). He had never worked at a place where he actually looked forward to going in to work every single day. The variety of courses offered, from TOEFL to Cinema, from General English programs to Academic English programs really makes ECLA the place for everyone. He currently teach Pre-Intermediate, Low-Intermediate and a Vocabulary elective class. He often encourage his students to read as much English literature and articles as possible. This would help them develop their vocabulary, spelling and sentence structures. He would encourage any student who joins ECLA to give their teachers regular feedback about their classes so that the classes could be catered to their needs.

One of the best things about ECLA is the beautiful city that it’s in. When he’s not enjoying the view of the Pacific Ocean from his classroom window, he’s usually at Carney’s enjoying the best chili hotdogs on the planet. Also, his favorite place in Los Angeles is the Staples Center. He’s a HUGE Lakers fan. He loves Staples Center so much because that’s the place where he was lucky enough to watch Kobe Bryant score 81 points in a single game.

His advice to students who are learning English is to get into the habit of reading English texts that are interesting to them. This will help them to build their vocabulary and their sentence structures!