We love that we get to celebrate US holidays with our students! Last week, ECLA hosted a Thanksgiving Potluck FEAST — turkey, friends, food and fun! Here, Student Ambassador Jacqi (Germany) tells us all about it!

Thanksgiving is one of the most popular annual holidays here in the US which always takes place on the fourth Thursday in November. With this day the Holiday Season begins. But why do Americans celebrate this certain day every year?

In general, Americans come together and praise all the things for which they are thankful. This essentially means that you get together with your whole family and before you start eating, you have to say at least one thing for which you are grateful. Afterwards, you can enjoy the food, the drinks and watch American football. As almost everyone of us decided to go abroad on our own, most students decided to celebrate instead with their friends.

To give everyone the possibility to experience this well-known holiday at least once, we organized a Potluck on Wednesday, the day before Thanksgiving. Nearly every student went to the supermarket, cooked or baked to bring some delicious food to school. In the pictures here you can see that the line for the Potluck was incredibly long. This also demonstrates the success of this event.

We had a big variety of food, such as the traditional turkey (which the school provided, among some other things) and many different sides: rice, vegetables, salad, sauces and bread. Additionally, there was a great amount of different pies, cookies and other sweets. 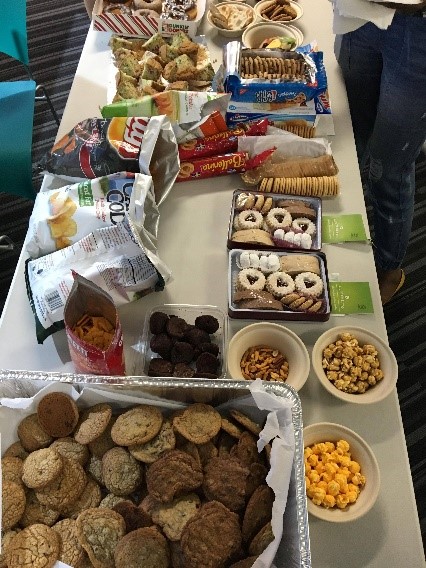 In addition, most of the students (including myself), planned a Friendsgiving on 11/23/2017. Friendsgiving is basically the same thing as Thanksgiving. The only difference is that everyone brings some food or some drinks to share with everyone.

First, it was a bit complicated because it seemed to be impossible to find one place where ten people can eat together. After we solved this problem we had to think about the meal and tried to figure out how we can have a turkey, because cooking it by yourself requires a lot of effort. Not only the big effort was a problem, but you also must remember that all of us are living with a host family or in our own apartment which also means that you often can’t cook at all.

Fortunately, we found a pre-cooked turkey. So, all we had to do was heat it up again. Besides the pre-cooked turkey, you can also find ready-made sides and pies in some supermarkets. In case you want to go to a restaurant, be aware of the fact that you have to make a reservation at least one week in advance. 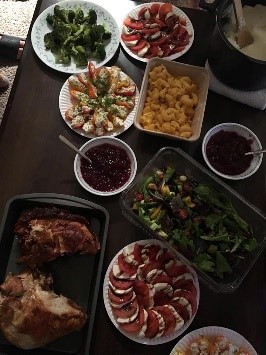 Although there were some challenges in the beginning, I had a great time at the Potluck in school as well as on the real Thanksgiving Day!

Find out more about Cambridge English in Los Angeles