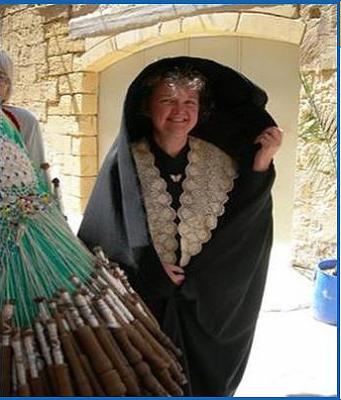 As well as taking an English course and holiday in Malta, you can also learn about the tradition and culture. Here’s a snippet about the island’s interesting culture.

The ‘Ghonella’ (pronounced as ‘awn-nel-la’) or ‘Faldetta’ is a large black silk shawl, or hooded cloak, and was part of the Maltese women’s Sunday best outfits and uniquely, the national costume until the mid twentieth century. It covered the head in a sort of stiff, starched frame made out of board, cane or whalebone, leaving the face uncovered. From the sixteenth century onwards, noble women and women from more affluent families often wore white or brightly coloured ‘għonnielen’. The origins of the ‘għonnella’ are unknown although legend has it that it was introduced as a sign of mourning. Eventually it faded out in the 1940’s/50’s soon after the Second World War. Today it is only seen at folkloristic events, heritage museums and on postcards