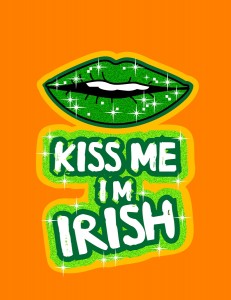 Get ready for green shirts, hats, shoes, and even beer because St. Patrick’s Day is this Saturday, March 17. Many people do not understand why St. Patrick’s Day – a traditionally Irish holiday – is so popular in the U.S. The answer is that many immigrants to the U.S. in the past were from Ireland, so many Americans have Irish ancestors and heritage. On St. Patrick’s Day many cities in the U.S. have big parades and celebrations. In Chicago, they even dye their major river green!

St. Patrick was actually a real person from Ireland who supposedly eliminated paganism* from Ireland. Many people today do not celebrate this transition when they go to parties on St. Patrick’s Day. Instead, St. Patrick’s Day is an opportunity to celebrate everything Irish and it’s an excuse for non-Irish people to drink a lot of Irish alcohol, such as Guinness.

Some common symbols associated with the holiday are three-leaf clovers or shamrocks and leprechauns. Four-leaf clovers are thought to be lucky. Leprechauns are tiny, green, fairy-like men who supposedly protect pots of gold under rainbows. The pictures of them are usually of drunk men wearing green hats and many people like to dress up like them on St. Patrick’s Day.

Although there is no big parade in Miami, there are plenty of Irish pubs with special bands and drink specials. Many students like to go to Drexel Pub on Espanola Way. Even if you are not Irish, it is a great opportunity to learn about a new culture and to have a few drinks too.

*paganism: any religion that worships many gods, rather than one God