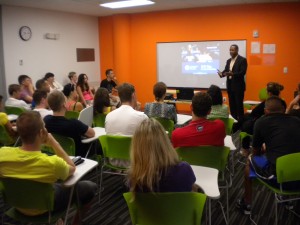 Last Friday, many of our classes combined to hear a lecture by a special agent from the U.S. Immigrations and Customs Enforcement (ICE) department. The agent told us about his area of expertise – human trafficking. Many students were surprised to find out that human trafficking happens in the U.S. often and is still a serious problem.

The special agent gave students tips to recognize victims of human trafficking and pointed out that many of these people do not see themselves as victims. One major tip that someone could be being human trafficked is if their passport and other important documents are being held by someone else. He then gave some details about a few of his cases he has worked on and the results of brave people testifying in court against the traffickers.

After his lecture, students and teachers asked questions about human trafficking and homeland security in general. Many people asked about laws in the U.S. versus in other countries. We also had a brief debate about legalizing prostitution and/or marijuana and how this would affect crime in various cities around the world. All in all, the lecture was very informative and the students had the opportunity to listen to a native English speaker talk about a very important issue affecting the world right now.