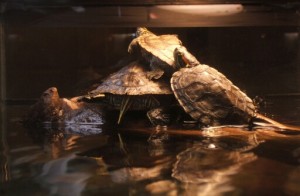 Summer means many things in Florida.  The weather gets even hotter (August is particularly hot!) and more humid and people flock to the beach.  But it isn’t only people that you can see there.

Summer is also time for Loggerhead turtles (remember the “dude” in Finding Nemo?) to make their way back to the beach in order to lay their eggs. In fact, over 90% of loggerhead turtles make their nests in Florida.  These turtles swim thousands of miles during the year all over the Atlantic and Carribbean — but when it’s time to lay eggs, they return back to the same beach where they were born.

When the turtle arrives on the beach, it can take up to an hour for it to dig a hole, lay all of its eggs (60-80!), cover the hole and make its way back to the water.  After that, the mother turtle will never see its young hatchlings.  Approximately 60 days later, the eggs hatch and the baby turtles head towards the ocean.  They are instinctively attracted to the reflection of the moon on the water; this is why streetlights are turned off on the beach during this period of year.

Scientists have followed many of these large turtles as they swim the ocean year-round.  This website shows maps of several turtles that have been tracked.  It’s incredible to see the distances that some of these animals have traveled!!