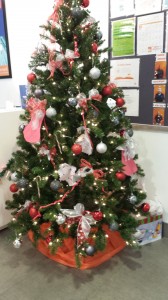 Have you ever heard of the phrase “White Elephant”?  It’s something that’s used to refer to an object that is no longer useful to its owner.  A “White Elephant” gift swap take that idea a step further.

During the holiday season in the United States, many people will partake in an activity called “Secret Santa”.   Participants pick names out of a hat, and then have a period of time to search for a gift for that person (usually with a pre-determined amount of money decided on).  The catch is that you can’t tell the other person that you are buying the gift for them, hence the name “Secret Santa”!  A “White Elephant Gift Swap” is just a little different.

In this game, a group of people will each bring in a small, unwrapped gift (once again, a pre-determined amount of money is agreed upon in advance.)  All the people bring their gifts in on the planned day and the fun begins:

Players take turns either choosing a gift from the pile, or stealing the a gift chosen from another player.  If the person decides to “steal” the gift from another participant, they are required to replace it with a gift that hasn’t yet been chosen from the “community pile.”  At the end, each person has a gift!

Of course, as with many games there are several variations and they can all be found on the ubiquitous Wikipedia page.   Students here at the EC Miami English School are encouraged to participate and take part!!