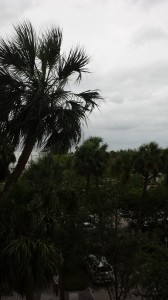 During the summer in Florida, it’s common for it to rain in the afternoon.  It’s just a typical aspect of life in the tropics.  The sun is out all morning and early afternoon, but then you start to see the clouds roll in.  If you’re laying on the beach, the clouds typically roll in behind you.  In San Francisco, it’s just as typical to see fog roll in early in the morning.  Back here on the beach, the tide is constantly rolling in — the ocean never stops moving!

“Roll in” means to approach from a distance, over land or sea.  The opposite (which you have probably already guessed), is roll out.  One more (two, actually!) idiom to add to your growing list!  Practice using your new idioms with your classmates during your English course in the US!