Here we are aware that our traditional Halloween celebration wouldn’t be complete without fun pumpkin carvings. It has been a traditional competition activity at  EC English School Miami ever since the center was opened back in 2012. As a matter of fact, it’s a yearly Halloween tradition that came to the United States from Irish immigrants. At our center we take care of providing enough pumpkins. We also arrange everything around our neat students lounge. Let me tell you, though, that pumpkin carving needs some special tools kits. Sometimes a simple knife would do the trick as well. That is precisely why usually on October 30th every year we host a competition with the most creative carved pumpkin. 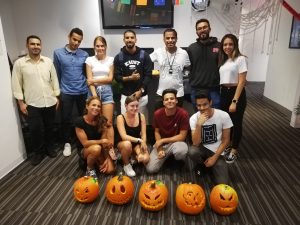 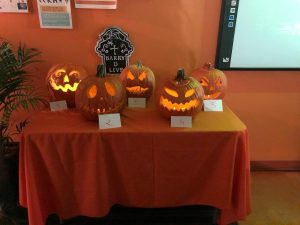 The students who want to participate split into teams, they watch a short but interesting tutorial pumpkin carving video, they work together, they do their thing, and they have their fun. In an easy and entertaining way, our students can learn that the top of the pumpkin is cut off to form a lid, the inside flesh is scooped out, and an image usually a scary or funny face – is carved out of the rind to expose the hollow interior. To create the lantern effect, a light source, traditionally a flame such as a candle or tea light, is placed within before the lid is closed. However, these lanterns can be used with electric lights that are also marketed. It is common to see pumpkin lanterns on doorsteps and otherwise used as decorations prior to and on Halloween.

This year contestants got the picture really well, as they were able to work on their corresponding pumpkins while listening to cool music. The results were awesome, and you can tell they did their best. Just take a look at the five carved pumpkins we got for this Halloween. Fun was in the air, as usual at EC Miami.