At EC English School Miami we love singing and we think it’s a pretty good idea to have our students involved. This week we had a special activity to combine English learning  with music. Anyways, what’s a better moment to chill out and a have a good time with music than right after class? We managed to get our participants in the mood by having a simple exercise with the song La Isla Bonita by Madonna. We know… what a hit, isn’t it? They had to listen to the song and complete some of the lines from the lyrics with words that were taken out. Participants showed they were engaged trying to catch such words, and it was funny because they thought they had heard a specific word and as a matter of fact it was a completely different one. In any case, when they completed the lines on the handout provided, we all together had a class discussion about what the message of the song is. Somehow, we found a link between la Isla Bonita and Miami Beach. 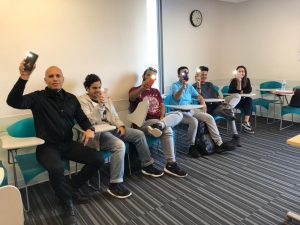 If you translate La Isla Bonita into English, it would go as The Beautiful Island. The point is very simple; Miami Beach is actually an island and on top of everything, it’s beautiful!!! So, there you go! Besides, just like in the song when it goes like this: “I prayed that the days would last, they went so fast”, we jumped to the conclusion that nobody wants to leave Miami Beach because they would love to stay longer. Finally, we sang along with lyrics  displayed on the awesome whiteboard in room 9 and it was quite a moment, very emotional by the way. Students were waving their phones up in the air with their flashlights on while they were reading, listening and singing. Members of the staff also felt like joining the party, if you know what it means. The activity was a success. Of course, students want to do it again. We are even thinking of making our signature activity for Wednesdays at EC Miami. Sounds like a great idea, right?