Of all the popular sports in the US, basketball has a special meaning in Miami. It’s because the Miami HEAT have been champions of the NBA three times so far – 2006, 2012, and 2013. That’s why we cannot forget about our beloved player Dwyane Wade. With the number 3 on his jersey he made outstanding contributions to win these valued championships. What a thrill it is to go to the American Airlines Arena. For all these reasons, Oleg Diukel, who is in the Intermediate level and coming from Russia, was really excited to go to one of the regular season games. This time against the San Antonio Spurs, and he was willing to surprise us with his awesome testimonial: 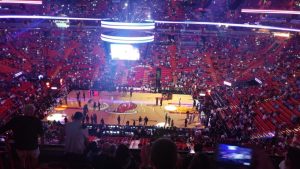 I can’t believe it was my first time in a basketball game in the US. It took place on January fifteenth of 2020. And you know what? This event was even better than I expected. There are many reasons why I had a wonderful time. For starters, the game was a thrill. There were many occasions in which the HEAT was down on the score, but at the end during the fourth quarter they pulled the win!! Secondly, the spectators were cheerful all the time, and their vibes were super contagious. Also, the athletes’ plays were just spectacular- there were dunks and three point shots. Even the fast food was a yummy bite. Finally, I have to say that I was impressed by the short performances before and during the game. That performance was like a real show with great music and well performed support team. There were even some funny competitions during the half time. And the funny thing is that I was watching these competitions with the same curiosity that I was watching the game. So anyways, I am happy that I got this unforgettable time that is part of the experience when you want to Learn English in the USA. I have something to tell for the rest of my life!