One of the most popular sports in the USA is American Football. It might be number one, actually. What do you guys think? This year in Miami we have the pleasure to host the amazing Super Bowl LIV (54), which is in reality the final game of the NFL (National Football League). The champion will be decided between the San Francisco 49ers and the Kansas City Chiefs. Although the “big game” is taking place in the Sunlight Stadium, we gotta let you know that the super cool vibes around South Beach are off the charts. One  of the very simple reasons why this is happening is that the awesome management in our iconic building 1111 Lincoln Road is hosting a series of Super Bowl events from January 29th to February 1st. . They are doing a really great job in anticipation to the “big game”. This kind of events  includes meetings and greetings with NFL players, such as James White, Cameron Jordan, Josh Allen, Derrick Henry, and Larry Fitzgerald. Also, there are going to be live media broadcastings, fan games, tasty food, and refreshing drinks. The best part is that all of this is free of charge for our students and members of the staff! How cool is that, huh? 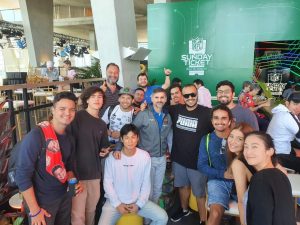 Last Wednesday, though, it was the opening of this series of events, and we were all really curious about meeting the NFL player of the day, James White-a running back player for the New England Patriots (the one right in the middle of the picture below). Our students at English school in Miami were in line with a lot of excitement and expectation. To be honest, we all had waited for a little kind of a while until all of a sudden we got access to the seventh floor. We got walked in to the venue, and it was nothing short of amazing; nice and cool music along with tasty food being served. Then, James White, native from Fort Lauderdale, Florida, showed up and showed us how nice and humble he is to let us shake hands a take this great picture for the memory below. What a great and unexpected surprise this time was!!! 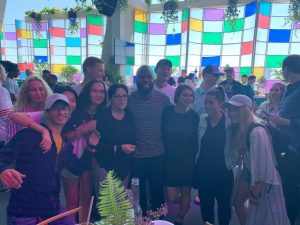