The Monster Jam takes place in the USA every year. It’s a worldwide entertainment event that has been going on since 1992. In each country it’s possible to watch this fantastic American cars show on TV. However, on this occasion instead of going to a baseball game at the gorgeous Marlins Park of Miami, fans made a little exception in order to attend to the roaring Monster Jam hosted in our always sunny city . Actually, three of our students coming from Switzerland Ronny, Matthias and Michele did, and they had tons of fun as long life fans last February 22nd and 23rd . Around our English school in Miami they constantly point out that in Switzerland the Monster Jam is a big deal. They couldn’t wait to go to this one and make a dream come true. Cool way to spend your free time when you are not in class, huh guys? For them, this was an awesome opportunity to be in touch with the culture of American entertainment. 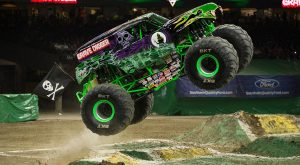 The Stadium was packed with most of the public who were children wearing a t-shirt or a hat of their favorite cars, and they could all feel the typical atmosphere of the American culture. Well then, so this time enjoying watching all those heavy pound trucks driven by high performance pilots can not be passed up. Countless feats of dirt hitting and grinding are the delight of the show. Also, the booming roar gets you those thrilling goosebumps. Actually, the Monster Jam features three events: Racing Competitions, Skills Challenge, and Freestyle. At 7:30 pm the show began. All the cars came into a ﬁeld full of obstacles and hills for the jumps. There was a quick presentation of the cars and it was time for the ﬁrst competition, the race. This competition is about testing the speed of the cars with the ability of the drivers. In fact, it’s a 1 vs 1 race where the path has the shape similar to an eight and the car that ﬁnishes ﬁrst can move to the next round. The champion of this competition was Grave Digger. After ten minutes, in which the employees of Monster Jam rebuilt the ﬁeld, the second competition started, skills challenge. This part consists of making a show like driving the vehicle on two wheels only or getting it up as far as possible. The champion was Max-D, a legend of this competition. 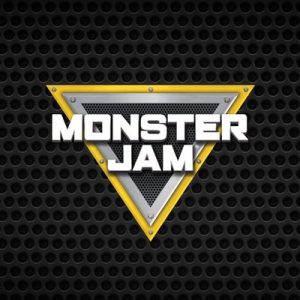 Last but not least, the most exciting competition took place, freestyle. This round is all about show, the drivers have 120 seconds to create as many jumps as possible to win. After two competitions the cars had some problems with the design or the engine but nothing stopped the drivers from trying to do the backflip. Yes guys, you read that right. Just two cars pulled this fantastic trick off and they were Jester and Son-Uva Digger. Unfortunately for Jester, the trophy of this competition went to Son-Uva Digger, because he completed a path full of jumps and special tricks. In short, it was a nice experience for them while enjoying a different kind of weather, and looking at the trucks closer than usual, meeting drivers and crews, getting autographs, and enjoying friendly activities. Despite the noise of the cars, this event was amazing and it was a great opportunity for people who are passionate about sports and American culture.