The Cambridge Tests are this Saturday, and EC Miami has a large group that has been preparing for the past three months for various levels of the test.  They’ve put in a lot of time and effort with their English course in the US, and we wish them all the best on their exam and beyond!!

Here we see Sarah and Giulia, two of our academic English students that are currently preparing for their CAE exam.  (You may remember them!) Here we see them taking their final practice test for the speaking section, which will be in two short days on Sunday! Good luck to all our Cambridge students on the first part of their exams this weekend!!

I have been co-teaching the FCE class here at EC Miami since early January.  The writing section of this test tends to give students a particularly hard time, and I have worked this class particularly hard in order to help them practice.  FCE students are also expected to read the book The Perfect Storm, as one of the questions on the writing section will ask about this book. Today, I gave the class two writing options, and 15 minutes to complete it.  The idea is to get the class to think in English, as opposed to translating from their language. Kristina, one of my Russian students in the class, wrote a great practice essay today related to the book.  She has shown great improvement in our classes and I’m sharing her essay on “What is a ‘Gloucesterman’” with her kind permssion: To be a ‘Gloucesterman’ doesnt’ mean to be born in Gloucester or live there. To be a Gloucesterman doesn’t mean to be a fisherman.  This definition doesn’t make you, you make this definition.  You can call yourself a Gloucesterman if you deserve it. The fishermen call themselves Gloucestermen not because they provide their hometown with a lot fish.  They call themselves this because they don’t know the meaning of “fear”.  They are men who never give up.  They are men who have a goal and do everything to reach it. The Gloucesterman is adventurous, brave, and warm-hearted.  The Gloucesterman always supports and protects their fellow crewmembers. The Gloucesterman doesn’t know how to lose.  Only death can destroy them.  But even that takes a lot of effort. Great job, Kristina!  You showed a lot of thought! ** Remember, in addition to small group classes, one to one English lessons in Miami are also available! **

I have been co-teaching the FCE class here at EC Miami since early January.  The writing section of this test tends to give students a particularly hard time, and I have worked this class particularly hard in order to help them practice.  FCE students are also expected to read the book The Perfect Storm, as one of the questions on the writing section will ask about this book. Today, I gave the class two writing options, and 15 minutes to complete it.  The idea is to get the class to think in English, as opposed to translating from their language. Maria, one of my Russian students in the class, wrote a great practice essay today related to the book.  She has shown great improvement in our classes and I’m sharing her essay on “What is a ‘Gloucesterman’” with her kind permssion: I have just finished watching the movie “The Perfect Storm”.  I did it for the second time already and I will do it again after a while.  Why would I do it?  Because it gives me inspiration to live, to do my best.  It motivates me to have a challenge and achieve my goals.  I want to be a Gloucesterman! To be a Gloucesterman means to have no fear, to love life, to be responsible for your family, to respect people around and to be proud for what you do.  That definition came from one very clear example when the rescue team tried to find people to save.  One of them said that most of the people were from Gloucester. That move and book had a very sad ending.  And it’s based on a true story.  For me, it’s a perfect example of strength. Great job, Maria! — Mark   ** Remember, in addition to small group classes, one to … Read more 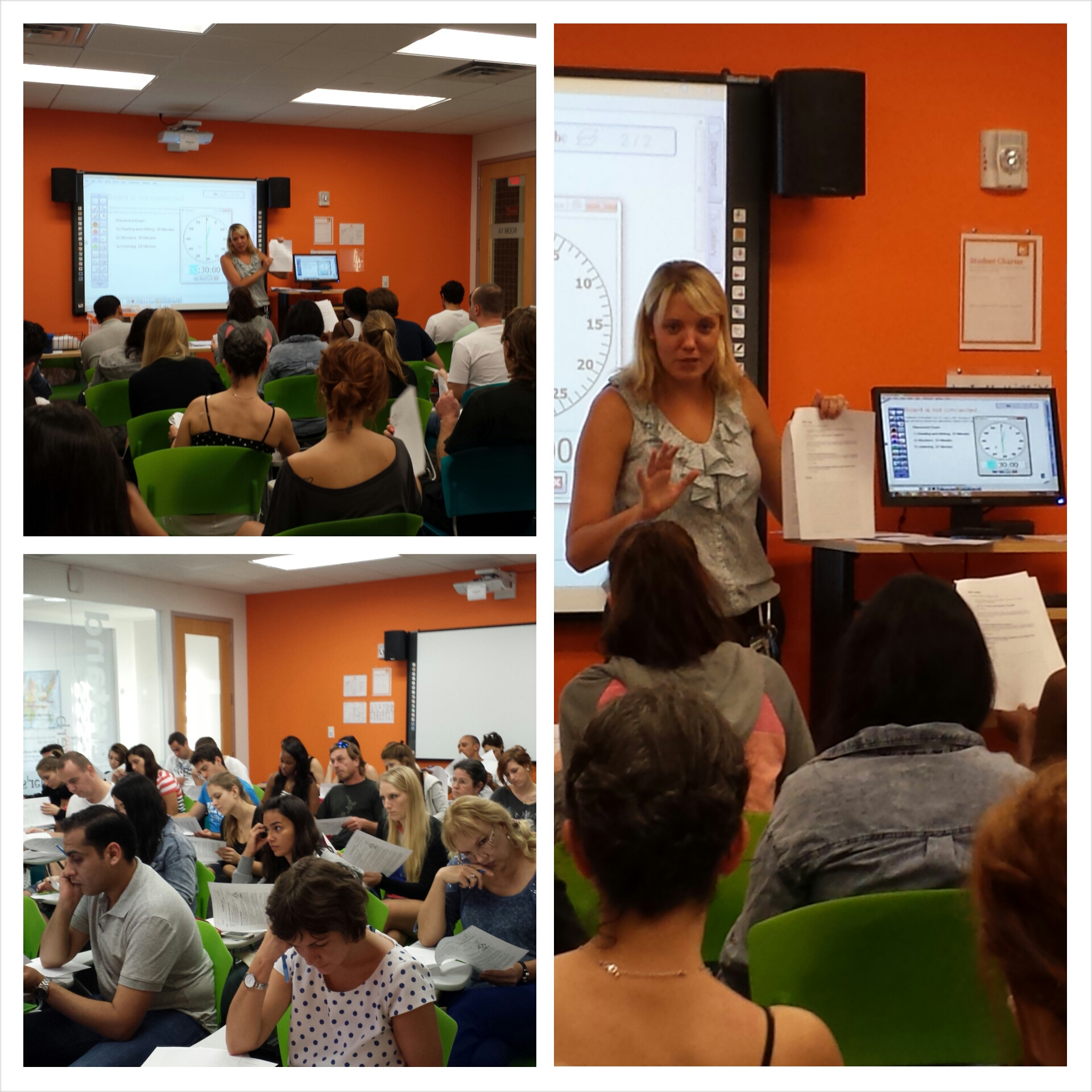 Was your New Year good?  Did you make your resolutions?  Have you broken them yet? Here at EC Miami, our New Year has been particularly busy.  This is the first full week of English classes in Miami in 2014, and we started it off by having more than 80 new students arrive for orientation and start their English classes in Miami Beach. The first day is whirlwind of activity for our new students.  Not only do they take an evaluation in order to be correctly placed into a class, but they also learn about the school and about the local area as well.  It’s also an opportunity for them to take a short walking tour of the immediate area, and many of them went to the beach for the first of what is surely many visits. New Year.  New Classes.  New Students.  Happy 2014, everyone!

Every month students are given an opportunity to attend a college-style lecture given either by one of our teachers, or by an invited member of the community.  Over the time since the EC Miami English School has been open, we have had many students learn about varied subjects.  One constant, however, is in November when Thanksgiving is discussed.  This year, two lectures were given to students in different academic levels.  Students wrote about the lecture they attended, and then one winner from each group was chosen. From the Pre-Intermediate class, we have Evgeniy Evseev from Russia: Thanksgiving is a national holiday. This holiday means that all people give thanks for God . In 1620, the Mayflower sailed up to the “New World” — America, where there lived Native Americans whose were “Indians”.  When pilgrims were exploring the new world, Indians helped them with food, clothes, and medicine.  The first Thanksgiving was celebrated by the pilgrims and Indians together.  But later, the pilgrims decided that this territory belong to them.  Certainly the Indians didn’t agree and the war began.  As a result pilgrims won the war.  In 1863, Lincoln made Thanksgiving official.  This holiday is celebrated every fourth Thursday. In our days, Thanksgiving is usually celebrated with family at home.  A lot of people cook special holiday dishes like green beans, turkey, sweet potatoes, pumpkin pie, and turducken. The next day after Thanksgiving is “Black Friday”.  Then day when sales start and people buy everything that they want.

You may remember a recent post regarding raising funds to help with Disaster Relief in the South Pacific. As part of EC Miami’s continuing efforts to help the people affecting by this terrible tragedy, students and staff are encouraged to take part in our Bake Sale tomorrow (Friday, November 22). Long-Term students (such as those preparing for their Cambridge ESOL exams) and recent arrivals are all asked to bring in baked goods to the student lounge tomorrow morning to sell to the rest of the students and staff. All money raised will be sent to relief efforts in the Philippines.

It’s that time of year! The time that Americans get together with family and friends and eat. And eat. And Eat. AND EAT!! It’s Thanksgiving!!! Of course, there is more to Thanksgiving than just food — but for some of us the food is what makes it one of the favorite holidays in the United States. Families will prepare for days in advance for the feast that comes up, and the Thanksgiving holiday is one of the busiest travel days of the year! Tomorrow, November 21, Reese and Sheila will be giving lectures to the students about Thanksgiving. Higher-level students and those that are getting ready for their Cambridge ESOL Exams will meet with Sheila, while lower-level students will get all their Thanksgiving information from Reese. All students are encouraged to go — and then prepare a Thanksgiving dinner of their own! Check back here after the holiday to see which students turn in the best essays about Thanksgiving. There will be two winners chosen!

Many students come to EC Miami for an extended period of time. Students that are preparing for their Cambridge ESOL Exams, for example, spend around three months with us brushing up on their skills and then take the test at the end of their time. One of the perks of coming to South Florida for so many students is, other than the beach and nightlife, the Shopping. Ah, shopping. The promise of arriving in a country with two suitcases and needing Five after buying all the clothes and shoes that your heart desires. The necessity to pay extra fees on your flight going home because of all the extra baggage. Why complicate things? This year, we are collecting clothes that students and staff don’t wear any longer to donate to local charities here in South Florida. Everyone is encouraged to drop off any clothes they don’t want anymore in the box that has been placed in the lobby. Don’t worry about filling the box — we can get more!

The color red makes people think of many things.  One things that we associate red with in American English is with embarassment and/or shame.  Let me (Mark) tell you a story:   When I was a teenager, I was an exchange student in Bogota, Colombia.  I was new to Spanish, and made all of the mistakes that language students typically make.  Bad verb-subject combinations, mistaken vocabulary, and poor pronunciation were just some of the problems that I had when I was learning the language.  In fact, when I work with my students that are prepping for their Cambridge ESOL Exams or TOEFL, I tell them that I made much worse mistakes than they could ever imagine.   One day, in a Spanish class at the school in Bogota, I was asked to answer questions from various students.  They would ask me in English (giving them a chance to practice) and I would have to answer in Spanish (forcing me to practice as well).  One person asked me about a time I had been embarassed.  I told them as best as I could about spilling a soda on my pants at a shopping mall, and said “Estaba embarazado.”  After the teacher looked at me curiously several times (and after much laughter from the 40 or so students in the class), I was informed that I had told the entire class that I was pregnant.   How embarassing.  How biologically impossible.   My face turned red.  I was blushing.  I was very red-faced that day in class.   Yes, red-faced means embarassed and blushing.  Do you get red-faced very easily?