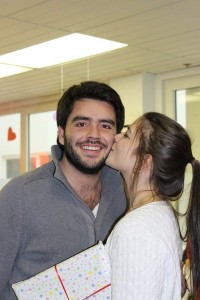 Just heard this on the radio this morning – thought it was really cute!!   Despite the popularity of the term “French kissing,” France didn’t officially recognize the term until 2013. The French had several other terms to describe the act of kissing with tongues, and now, for the first time, there’s a single French word for it: “galocher.”

The 2014 edition of France’s Petit Robert dictionary has just been released.  You will now find the verb galocher that is defined as “to kiss with tongues”.

EC Montreal loves to play cupid!  So many of our students have found love here and have gone on to marry and have families with their EC classmate sweetheart!