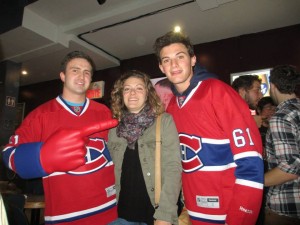 On October 1, EC Montreal will be taking its students to the Quartier des Spectacles to participate in the NHL face-off, a wonderful hockey street festival!  It will be a day filled with lots of performances and surprises!

It’s a street festival organized by the NHL to pump up the volume and excitement around the opening game of the hockey season for the Canadiens that night, which features the Habs battling the Toronto Maple Leafs at the Bell Centre.

The musical group Kings of Leon will be the star attraction at the Molson Canadian NHL Face-Off! 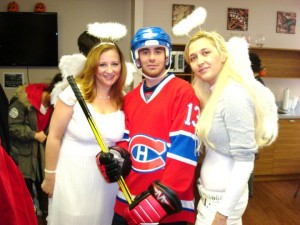 Festivities will kick off at 3 p.m. with hockey-related things, like slapshot contests and an all-female indie Toronto band The Beaches play at 4:30  The Grammy Award-winning rockers Kings of Leon will perform at 6:30. The Nashville band, will be on at around 7:10, just before the first puck drop at the Bell Centre.

When the puck drops you’ll be able to watch the game on giant video screens set up in the heart of the Quartier des Spectacles, which will run the French-language RDS broadcast of the game.  In a unique spirit of cooperation between two rival networks (and two cultures), the feed will then switch over to CBC, the English speaking network, at the first intermission to show Coach’s Corner with Don Cherry.

“NHL Face-Off is a celebration of our season,” said NHL chief marketing officer Brian Jennings. “We’ll have a fan festival that really celebrates the sport of hockey. It’s fun, it’s youthful, it’s social. We want people to get together and have a positive shared experience around the sport of hockey.”