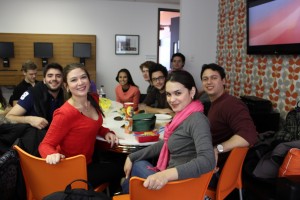 Monday, November 11 is a holiday.  EC Montreal will be closed as it is Remembrance Day.  If you are looking for something to do on this holiday date, you should check out Cinemania, Montreal’s French Film Festival!

The Cinemania festival presents audiences with French-language films of excellence and originality.

It has become the annual rendez-vous of movie lovers to discover quality feature films judiciously selected from over 120 films viewed annually by its professional team of programmers. Many of the greatest names of French cinema are featured at the festival.

Cinemania has grown from modest beginnings at The Montreal Museum of Fine Arts into an internationally recognized event at the Imperial Cinema, one of the largest dedicated French-language feature film festivals in the world solely devoted to premieres in North America, Canada, or Quebec. Its large-screen format, always in 35mm, and comfortable seating in the historic and majestic Imperial Cinema, make Cinemania an eagerly anticipated special event in Montreal’s annual cultural calendar.

Cinemania is running from November 7 to November 17.  Look for a Cinemania outing on EC Montreal’s activity calendar of events!