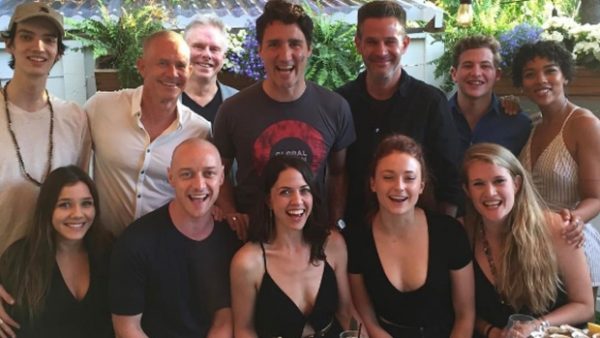 EC Montreal students are always surprised to learn that Montreal hosts a lot of Hollywood movie productions.  Montreal is chosen because it could look like any city in the world!  It is a modern North American city that has that Old European charm.  If you visit Old Montreal it could look like a city in France whereas the financial district for example could look like Chicago or New York City.  This is very attractive to movie makers who can film the entire movie in its entirety from one location.

We recently learned that the new X-Men movie is currently being filmed in Montreal. Justin Trudeau our beloved Prime Minister visited the set of X-Men yesterday.

The leader of the X-Men hailed Justin Trudeau as a “real-life superhero” on Instagram, after the prime minister paid a visit to the set of “X-Men: Dark Phoenix” in Montreal.  Actor James McAvoy, who plays Professor Charles Xavier in the superhero franchise, posted a photo of Trudeau and the rest of the film’s cast on Instagram Saturday.  “Just met ‘the dude,'” McAvoy wrote. “Thank you Canada for such a progressive, impressive and somewhat suggestive real-life superhero.”

If you join us at EC Montreal don’t be surprised to run into celebrities enjoying magical Montreal!