Boston, first incorporated as a town in 1630, and as a city in 1822, is one of America’s oldest cities, with a rich economic and social history. What began as a homesteading community eventually evolved into a center for social and political change. Boston has since become the economic and cultural hub of New England.
The history of Boston plays a central role in the American history. In 1630, Puritan colonists from England founded the city, which quickly became the political, commercial, financial, religious, and educational center of the New England region. The American Revolution erupted in Boston, as the British retaliated harshly for the Boston Tea Party and the patriots fought back. They besieged the British in the city, with a famous battle at Bunker Hill and won theSiege of Boston, forcing the British to retreat. However, the British blockade of the port seriously damaged the economy, and the population fell by two thirds in the 1770s. The city recovered after 1800, becoming the transportation hub for the New England region with its network of railroads, and even more important, the intellectual, educational and medical center of the nation. Along with New York, Boston was the financial center of the United States in the 19th century, and was especially important in funding railroads nationwide. In the Civil War era, it was the base for many anti-slavery activities. In the 19th century the city was dominated by an elite known as the Boston Brahmins. They faced the political challenge coming from waves of Catholic immigrants. The Irish Catholics, typified by the Kennedy Family, wrested the political control of the city by 1900. The industrial foundation of the region, financed by Boston, reached its peak around 1950; thereafter thousands of textile mills and other factories were closed down. By the 21st century the city’s economy had recovered and was centered on world-famous education, medicine, and high technology—notably biotechnology, while the many surrounding towns became highly attractive residential suburbs.
The Freedom Trail is a 4 km (2.5 mile) long path through downtown Boston that passes 16 of the city’s historic landmarks. It starts at the visitor information center in Boston Common where you can pick up a map and brochures. Many of the sights along the red-painted line are free of charge.
The Freedom Trail starts at the Boston Common as this was the area where the British Forces were encamped during the occupation from 1775 to 1776. While walking towards the Massachusetts State House, you’ll pass the Robert Gould Shaw Memorial, the first stop of another Boston Trail, the Black Heritage Trail, which connects historical sites linked to the history of African Americans in Boston.
the Massachusetts State House, Shortly after the revolution, the State House was built by Charles Bullfinch as the new center of state governance. Today, the building still serves as the seat of the government of the Commonwealth of Massachusetts.
The next stop on the Freedom Trail, Park Street Church, is known for its involvement in political, social and humanitarian issues. In 1829, William Lloyd Garrison gave a speech from the church’s pulpit condemning slavery. He was the first to do so in public.

Right next to Park Street Church is the Old Granary Burial Ground, named after the granary that once stood on the site of the church. Some of Boston’s most famous revolutionaries were buried here, including John Hancock, Samuel Adams, Robert Treat Paine (all three signed the Declaration of Independence) as well as Paul Revere and victims of the Boston Massacre.
Following the red line of the Freedom Trail on Tremont Street leads to another burial ground, the oldest in the city. The only burying ground in Boston for 30 years, it is the resting place of some of Boston’s historical figures, including John Winthrop, Massachusetts’ first Governor and William Dawes, one of the three riders who alerted Minutemen of the arrival of the British army.
The burying ground is located near King’s Chapel, a granite building completed in 1754. It replaced an original wooden chapel, dating back to 1688. The chapel’s pulpit, built in 1717, is one of the country’s oldest.
The trail now turns down School street, where a mosaic on the sidewalk commemorates the site of the First Public School. As the name suggests, this was the site of the country’s first public school, established in 1635. Benjamin Franklin attended classes in this school before he dropped out. His statue can be found nearby in front of the Old City Hall.
The Old Corner Bookstore Building This brick landmark building at the corner of School Street and Washington Street stands on a plot once owned by Mary Hutchinson, a religious reformer who was expelled from Massachusetts in 1638 for heresy. Built in 1718, the Bookstore Building was long home to a publishing house and later a bookstore.
Just south of the Old Corner Bookstore Building, on Washington Street, stands the Old South Meeting House. The building had the largest capacity for town meetings in colonial Boston, often used by patriots who encouraged crowds to revolt against British taxation. One of these meetings, on December 16, 1773, led to the ‘Boston Tea Party’, which sparked the Revolutionary War.
The Freedom Trail line now leads back north towards theOld State House, the seat of the British Colonial government from its construction in 1713 until the end of the American Revolution in 1776. After the revolution the building was used as the Commonwealth’s State House until 1798, when they moved into the new (and current) State House.

The square in front of the Old State House is the site of the Boston Massacre, where on March 5, 1770, British troops opened fire on colonists who had been taunting them throwing rocks and hurling insults. Five colonists were killed that day in what proved to be one of the catalytic events leading to the American Revolution.
The next stop on the Freedom Trail is Faneuil Hall, a building known as the ‘Cradle of Liberty’. While Faneuil Hall’s first floor was Boston’s main market place, the second floor served as a meeting place. Samuel Adams was one of the patriots who gathered here, trying to convince fellow colonists to unite and fight against British oppression. A statue of Samuel Adams stands in front of Faneuil Hall.
The Paul Revere House is the house where Paul Revere lived, when he made his famous ‘midnight ride’ to warn minutemen in Lexington of the impending arrival of British troops. Revere, a silversmith, bought the house in 1770. Originally built in 1680 it is now the oldest house in downtown Boston.
close to that there is the Old North Church, On April 18, 1775, Robert Newman, sexton of the Old North Church, hung lanterns in the tower of the church, signaling to Paul Revere that British troops arrived by sea. Hence Revere knew he could best warn John Hancock and Samuel Adams of the arriving British troops by riding over land.
Boston’s second oldest burying ground after King’s Chapel’s is the next stop on the Freedom Trail. Many of the early colonials are buried here as well as many slaves and freedmen. Robert Newman, the sexton who helped Paul Revere by hanging lanterns in the Old North Church tower, is also buried here.
The Freedom Trail now leads across the Charlestown Bridge towards Charlestown’s Navy Yard. This was one of the country’s first shipyards, set up to create a naval force which up to that point had been no match for the British. The U.S.S. Constitution, built in 1797 and the oldest warship of the U.S. Navy, is moored here. Possibly the most famous vessel in the U.S., it won no less than 42 battles while it lost none and was never captured by the enemy.
The last stop on the Freedom Trail is the Bunker Hill Monument, a granite obelisk commemorating the battle of June 17, 1775 between the British and colonial forces. The battle was won by the British but they were forced out by George Washington’s troops nine months later. Dedicated in 1843, the monument was the tallest in the U.S. until the Washington Monument was built in 1885. 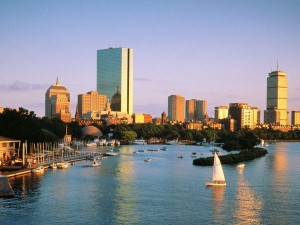