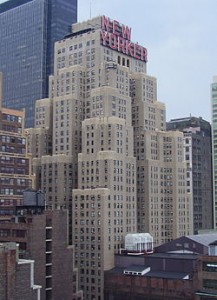 The New Yorker Hotel was built by Garment Center developer, Mack Kanner. When the project was announced in 1928, the Sugarman and Berger designed building was planned to be 38 stories, at an estimated cost of $8 million. However, when it was completed in 1929, the building had grown to 43 stories, at a final cost of $22.5 million and contained 2,500 rooms, making it the city’s largest for many years. Hotel management pioneer, Ralph Hitz, was selected as its first manager, eventually becoming president of the National Hotel Management Company. An early ad for the building boasted that the hotel’s “bell boys were ‘as snappy-looking as West Pointers'” and “that it had a radio in every room with a choice of four stations.” It was a New Yorker bellboy, Johnny Roventini, who served as tobacco company Phillip Morris’ pitchman for twenty years, making famous their “Call for Phillip Morris” advertising campaign.

Much like its contemporaries, the Empire State Building (1931) and the Chrysler Building (1930), the New Yorker was designed in the Art Deco style which was popular in the 1920s and 1930s. In his book, New York 1930, Robert A. M. Stern said the “New Yorker’s virtually unornamented facades consisted of alternating vertical bands of warm gray brick and windows, yielding an impression of boldly modeled masses. This was furthered by the deep-cut light courts, which produced a powerful play of light and shade that was enhanced by dramatic lighting at night”.

In addition to the ballrooms, there were ten private dining “salons” and five restaurants employing 35 master cooks. The barber shop was one of the largest in the world with 42 chairs and 20 manicurists. There were 92 “telephone girls” and 150 laundry staff washing as many as 350,000 pieces daily.

Throughout the 1940s and 1950s the hotel was among New York’s most fashionable and hosted many popular Big Bands, such as Benny Goodman and Tommy Dorsey, while notable figures such as Spencer Tracy, Joan Crawford and Fidel Castro stayed there. Inventor Nikola Tesla spent the last ten years of his life in near-seclusion in Suite 3327, where he died, largely devoting his time to feeding pigeons while occasionally meeting dignitaries. The New York Observer noted that in the building’s heyday, “actors, celebrities, athletes, politicians, mobsters, the shady and the luminous—the entire Brooklyn Dodgers roster during the glory seasons—would stalk the bars and ballrooms, or romp upstairs”. In later years, Muhammad Ali would recuperate there after his March 1971 fight against Joe Frazier at the Garden.