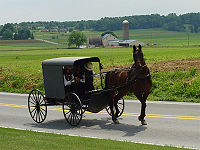 One of EC’s weekend trips is to the Amish Country.
In the early 18th century, many Amish and Mennonites emigrated to Pennsylvania for a variety of reasons. Today, the most traditional descendants of the Amish continue to speak Pennsylvania German, also known as Pennsylvania Dutch. However, a dialect of Swiss German predominates in some Old Order Amish communities, especially in the American state of Indiana.[4] As of 2000, over 165,000 Old Order Amish live in the United States and approximately 1500 live in Canada.[5] A 2008 study suggested their numbers have increased to 227,000,[6] and in 2010 a study suggested their population had grown by 10% in the past two years to 249,000, with increasing movement to the West.[1]

Amish church membership begins with baptism, usually between the ages of 16 and 25. It is a requirement for marriage, and once a person has affiliated with the church, he or she may marry only within the faith. Because of a smaller gene pool, some groups have increased incidences of certain inheritable conditions.[7] Church districts average between 20 and 40 families, and worship services are held every other Sunday in a member’s home. The district is led by a bishop and several ministers and deacons.[8] The rules of the church, the Ordnung, must be observed by every member. These rules cover most aspects of day-to-day living, and include prohibitions or limitations on the use of power-line electricity, telephones, and automobiles, as well as regulations on clothing. Many Amish church members may not buy insurance or accept government assistance such as Social Security. As Anabaptists, Amish church members practice nonresistance and will not perform any type of military service.

Members who do not conform to these expectations and who cannot be convinced to repent are excommunicated. In addition to excommunication, members may be shunned, a practice that limits social contacts to shame the wayward member into returning to the church. During adolescence rumspringa (“running around”) in some communities, nonconforming behavior that would result in the shunning of an adult who had made the permanent commitment of baptism, may meet with a degree of forbearance.[9] Amish church groups seek to maintain a degree of separation from the non-Amish world. There is generally a heavy emphasis on church and family relationships. They typically operate their own one-room schools and discontinue formal education at grade eight. They value rural life, manual labor and humility.