Chiyuan Chang is a student from Taiwan who has been studying at EC New York since April 3rd and will continue studying until October 6th. Here is some more information about his experience at EC New York. 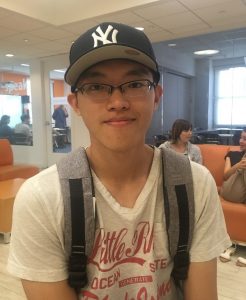 What does he do in Taiwan?

He was drafted into the army after he graduated from college.

Why is he studying English?

He is studying English because he wants to work for a foreign company in the future.

Why is he studying in New York City?

First, his relatives live in NY. He doesn’t need to pay for the room.In addition, there are a lot of people from all over the world in NY. He can meet people from different cultures quite easily.

What is the best thing about living or studying in New York City?

He loves the New York Yankees. He loves being able to go watch baseball games easily. Since he’s come to New York, he has been to five baseball games! Also, although he needs to do house work by himself like doing dishes, washing cloths and so on, he thinks that he can become more independent from his parents by doing these things.

What does he enjoy the most about EC New York?

There are many students from all over the world, so he can make many foreign friends here. He can also learn about different cultures by talking to them.In addition, the teachers are always active. He thinks that they always try to make the classes fun and exciting.

What plan does he have after she graduates here?

He can stay here for 2 months after he graduates from EC, so he plans to do an internship. After that, he will go back to Taiwan and begin job hunting!

Thanks, Chiyuan! You could also learn English at EC New York, a New York ESL school.