New York is one of the most exciting and beautiful months of the year in New York City. There are several special events and festivals that take place during this month, and the weather is usually crisp. It’s the perfect month to learn English in New York!

Two of the most famous events are the NYC Oyster Festival and Pickle Festival. Both events are on the first weekend in October and celebrate local favorite foods.

Oysters have always played an important part of New York history. The New York Harbor is home to dozens of varieties of oysters, and the city loves consuming them. In fact, before the now ubiquitous hotdog carts, there used to be stands selling fresh oysters on the street! They were very cheap and fresh. Also, they literally helped build the city; some older streets in Financial District, like Pearl Street, were paved with piles of discarded oyster shells. Even today, empty oyster shells are throw into the harbor to be repurposed as oyster reefs, because oysters are excellent water cleaners!

The pickle festival takes place on the same weekend as the oyster festival, but takes place on Orchard Street in the Lower East Side. This location is significant, as it used to be the hub of Jewish life in the city. Dill pickles were brought over the Atlantic Ocean by Jewish immigrants from Russia and Poland, and have become an important part of the New York deli experience. At the festival, visitors have the opportunity to try several types of pickles, from sweet to spicy to extra sour.

October is Architecture Month in New York City, or “Archtober” for short. During this month only, regular civilians can get access to and take tours of buildings that are normally closed to the public. While most of these tours are free, there are some that require extra payment. One popular tour is the underground subway tour, that shows visitors secret and retired subway stations.

Lastly, and most famously, is Halloween. Halloween is one of the most fun and festive days of the year! The festivities start in the middle of October, with the dog costume parade kicking things off. On Halloween, it’s entertaining to walk around the city and see everyone’s costumes. In the evening there’s a huge parade in the village for participants and spectators alike. Although it’s crowded, the event is always organized and so much fun. Be sure to dress up! 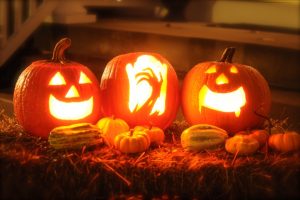