In the era of fake news, our Upper Intermediate Class at EC Oxford have created some fake combinations of real sports. However, one of them is actually true!

Read through the weird and wonderful sports below and try to find the one which is a genuine sport! 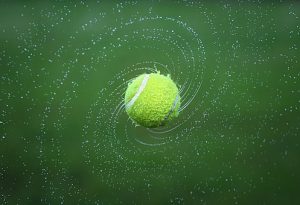 Horse Tennis
Can you imagine playing tennis on horse-back? You might come up with Polo. It’s similar to horse tennis. Polo originated in Asian countries and it has been played for ages. On the other hand, horse tennis’ roots are in Dallas, Texas in the USA in 1964. It use to be played among the local people there. But it’s becoming famous these days.

James Santriach says ‘The reason why it has caught attention is the root is in cow-boy culture. The players put on cowboy costumes.

WHAT – World Horse Tennis Association was set up officially in the USA in 2010. Josh Nicolas who is the head of the WHAT said, ‘We’re pleased about this sport having the chance to be known. This combination between tennis and animals can create a new way to make people enjoy watching sports.’

Daniel Smith – one of the best players from Colombia – says, ‘It’s more difficult. We need a lot of skills. It’s not only riding horses but also controlling them and of course, playing tennis. The hardest part is leading the horse to the point where you expect the ball bounces and to then hit it accurately.’

Foot-Hand-Ball
The match that we have been waiting for since last year is going to be this Saturday 24th June 2018. For the people who don’t know, we are talking about the new sport that has been increasingly covered in the news in recent months.

Foot-Hand-Ball is a new sport which originated in England two years ago, and through it has produced the World Foot-Handball Organization. FIFA supports this sport, because it has the official standards of a world sport according to the IASO (International Association of Sports Organization).

For the people who are interested in this game and want to understand how it works, here are some of the important rules that you have to know:
The game is based on football but there is a slight difference. The player can hold the ball for a maximum of 5 seconds, in his own half of the field, but they can’t hold the ball in the goalkeeper’s zone. Instead of 3 changes the coach can change 5 players.

On 24th June, it’s going to be the first official match of Foot-Handball between England and Scotland at Old Trafford in Manchester. The 75,000 seats that the stadium affords had already sold out only a week after the tickets were released.

Have you heard about ‘Darts-Skiing’? Can you imagine it? Maybe you know what is darts and skiing already! ‘Darts-Skiing’ originated in France. It started in the 19th Century. At the beginning, it wasn’t a common sport because darts is regarded as an indoor sport while skiing is an outdoor sport.

The game works like this: At first, the players ski down the slope and stop at the point of the darts. Then they don’t need to take off their equipment like Skiplate. That’s a difference from a biathlon. Also, only four players start at the same time. Compared to a biathlon ,the players start at different times. When they are playing darts, they need to make a specific score – 500 or 1,000. When they have reached this score they can restart their skiing. The winner is the person who passes the winning post first.

The International Biathlon Union, the IBU, was established in 1993. It has been supporting the ‘darts-skiing’ movement to make it a common winter sport. The head of the IBU, Dahlin Yeong, is trying to enter this sport into the next Winter Olympics which will be held in Beijing.

Chess-boxing is a sport where you have to fight both in the boxing ring and on the chessboard. It is particularly popular in Europe.

It is very hard for the competitors to go straight from boxing to playing chess. The spectators watch the boxing and hear a commentary on the chess match.

A Dutch artist called Iepe Rubingh invented the sport when he saw a picture of boxers on a chessboard in a comic book. The comic book was published in 1992 and the first chess-boxing competition was held in 2003.

The World Chess Boxing Organization has training centres in Germany, the UK and Bulgaria. Both sports need a lot of focus and the ability to attack while making sure you don”t give your opponent an opening.

Canadian hockey player Rob Roy had this crazy idea in 1993 to integrate a quiz into a hockey game. His in life was to become a hockey player. He wanted to train not only his body but also his brain. He got inspired by an event at Half-Time of a hockey match, in which the spectators had to answer a quiz to get a prize.

Since last year, Quiz-Hockey has attracted more than 500 amateur players and caught the attention of BBC Sport. This game has also been a big hit internationally.

Can you guess which above is the genuine sport? Students taking our English courses in Oxford are ready for the world of journalism and/or espionage if you can’t! 🙂