When you learn English in Oxford with us at EC, you also have a fantastic opportunity to get to know a fascinating university town. Here, Kevin and Haeun describe the tour of one of the oldest colleges of Oxford University. 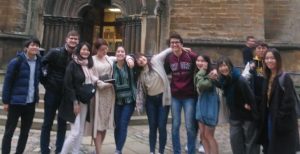 On 25th October 2018, twelve EC-students were guided by Robert Law, our Assistant Director of Studies, through University College of Oxford, the oldest in the city. Although only ten students were allowed to be guided through the College as we had to keep quiet, we all were allowed to go there as an exception. 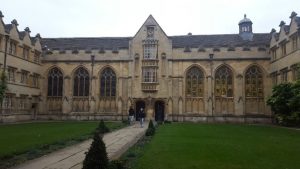 Firstly, we saw the main quad where Rob informed us that around us were the dormitories for the University students. Rob used to live here too when he was an undergraduate. His most memorable story of this courtyard is the charity project they did there. The goal was to jump on a trampoline for 24 hours. Obviously, people could share this job! Nevertheless, they had to do this without any break. Rob and his friends signed up at this event at 3 a.m. for an hour. The last five minutes were done by a 70 year old professor! All the people were worried about him. In the end, everything went well, and the charity project was completed. 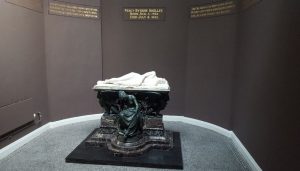 Percy Bysshe Shelly is a famous British poet. He was born 4th August 1792 and died early 8th July 1822. He lived during the Romantic period of English literature in which everyone talked about nature. At this time the college was strictly Anglican. Mr. Shelley, however, wrote an Atheist publication. This was not tolerated. Therefore, he was expelled from the college. He drowned in a sudden storm in the Mediterranean Sea. When they found him, people couldn’t recognise him at first. The only indicator for his identity were his poetry in his pocket. After his death, he became more popular. So, the college took all the fame for themselves and said: “Look! Percy Shelley was taught by our professors!” 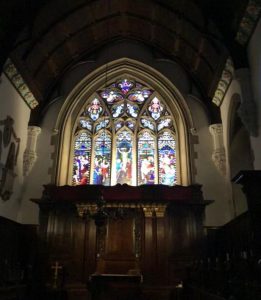 Then, we went to the Chapel of this College. It was a religious Chapel. The east window was Victorian whereas the other windows were earlier. From 1639 to 1651, the British Civil Wars hindered the constructors of building the Chapel completely. During this period all the wonderfully drawn windows were taken down and hidden. After the war, the pictures were interpreted wrongly, and they built the east side in a totally different way. Rob’s most impressive event was his first Christmas. Everyone lit their candles one by one in a completely dark room. It looked amazing. 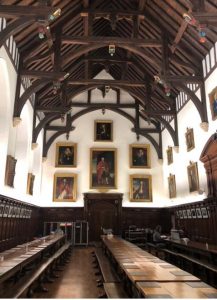 The last room Rob showed us was the dining hall. It was built like the Great Hall in Harry Potter. He explained to us that there are two kinds of dinners. The normal dinner and the dinner in which the students wore a gown at special events like Christmas. There’s a secret room where the teachers come from. Many things in this room could have inspired Harry Potter. The paintings, the tables and chairs. The same professor danced on a table at Christmas. Everyone worried about him, but it all went fine.

In our opinion, Rob provided us a good insight into the University College of Oxford. We think the tour was interesting and well done. I liked the stories Rob told us. We could relate to the living in this college. The students saw a little bit into his past and learnt some things about the college.

Even though your pictures of us weren’t successful, we appreciate your guided tour!!